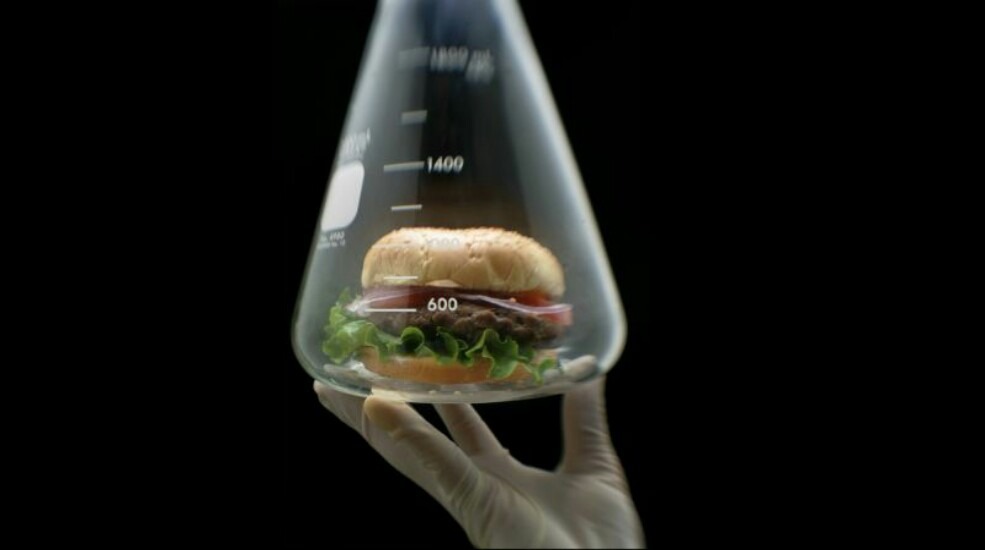 Will Plant-Based Meat and Vape Pens Cleanse the Earth By Feeding Us Greenhouse Gas?

It is a fairly common belief that a purely vegetarian diet is better for the environment, in comparison to that of animal product consumption. Regardless if there is truth to that or not, there does exist a patent document that alludes to one company’s hopes to scrub the Earth of greenhouse gases by growing plant-like substances, one way or another. While not a new idea, what’s interesting is how they specifically plan to mine and manipulate pollutants, far from the average expectation. Even more surprising, is how vape pens and cultured, plant-based meat may be folded into this plan, seamlessly under one conglomerate’s genetic blueprints.

This one company, in particular, has its hands in various honey pots already. Their hands are sticky from the pockets of countless investors from the United States governments to Jeff Bezos and Bill Gates through Breakthrough Energy Ventures. Their partnerships and agreements expand from Bayer Crop Science to the United States Department of Energy and an Australian University, stretching all the way to a $122 million deal with Canadian cannabis producer, Cronos Group.

The company’s name is Gingko Bioworks. The patent in question details a way to modify an organic substance, typically fungus or the infamous bacteria, E. Coli, with botanical DNA so that it produces energy and carbon-based byproducts. This process, known as chemoautotrophic production is similar to photosynthesis, except that instead of sunlight it uses inorganic chemicals like formate as fuel to grow fatty acids or proteins. It thus produces food ingredients with a far greater energy return compared to that of conventional farming; not to mention it’s potential negative greenhouse gas emissions. It can even produce gasoline alternatives, flavoring agents, and pharmaceuticals.

The main ingredient in animal-free meat products is pea protein, which has brought on a pea shortage now that the demand has skyrocketed. The company that manages to obtain a majority of the pea supply will come out dominant in this pea-protein based food industry. That is, unless a company overtakes the industry by patenting specific pea genes and begins synthesizing protein isolates instead, or simply begins to culture animal-free lab-grown meat on a massive scale, which some companies already are in the process of working towards.

To this end, Ginkgo Bioworks gave birth to the food ingredient company Motif Foodworks, receiving $90 million in funding from their external investors for animal-free ingredients. They have also recently partnered with Queensland University in Australia to conduct research into different food products. This is the analysis phase, where they detect the components of food that trigger our senses. The information they gather will be used to “decode” the genetics of those ingredients so they can instead be potentially recreated in vats of fermented, engineered fungus and bacteria. This ‘new-age’ food production will eat greenhouse gas rather than produce it.

But this is where it gets tricky. If “carboxymethyl cellulose” sounds like too much like a chemical, perhaps the ingredient “pea protein isolate” should be considered. Does modified cellulose really come from “plant” starch, or is it just another lab-cultured, animal-free replicant? Remember that “plant-based” is supposed to mean cultured meat “based” on the structure of plants, not “derived” from botanical origins.

‘You are what eat’ as they say; if the same is true for chemoautotrophs, it appears they are feeding us greenhouse gas, one animal-free burger at a time.

Biochemical engineers often think they know a ‘better way’ to produce proteins, and more recently, cannabinoids. Take out the farmer and the complex balance of nature, and replace those organic elements with bio-hacked concoctions. A tank filled with a sort of primordial soup of genetically modified yeasts is preferred over plants by some.

The growth of protein isolates from jars of yeast could lead to the development of a way to incorporate pea protein synthase genes into this soup, forever ending a global demand for peas.

Agricultural limitations were felt in Canada’s cannabis supply at the beginning of legalization and even during the second wave of legal products. A few large-scale licensed cannabis producers, however, did not repeat this infamous mistake when vape pens and edibles became legal. To rapidly create ‘cannabis oils’ at a low cost, some of these prolific producers announced plans to move past a few natural elements, such as actual cannabis or any plants whatsoever. Cannabinoids produced by a few companies would be fermented in tanks of yeast much like animal-free proteins, as opposed to the traditional farming setup.

Cronos Group was one of the first producers that got vape pens onto Canada’s select few licensed cannabis store websites. In November 2019 they announced that one of their facilities would be switched from cultivation to R&D and the production of derivatives, according to a press release. This was after acquiring 84 000 square feet of GMP compliant fermentation space from Apotex Fermentation Inc. in July, 2019, for the production of derivatives.

“Together with Ginkgo, we are bringing innovation and the power of biological manufacturing to the cannabis industry, aiming to allow for cannabinoid production at large scale and with greater efficiency than is currently possible with traditional cultivation and extraction, ” Mike Gorenstein, CEO of Cronos Group, stated.

Vape-pens and plant-based meat under one umbrella

The culmination of Gingko Bioworks’ investments gather cannabis vape pens and animal-free proteins under the same umbrella of production – investments flexing from food-ingredients to cannabinoids.

As soon as the sale of “cannabis derivative products” such as vapes, edibles, and topicals were around the corner in Canada, and as more states in the US were about to legalize cannabis, Cronos Group made financial changes geared towards United States interests, as well as beginning to report their records in USD. This not only positioned them closer to their tobacco venture with Altria Group but coincidentally with Ginkgo Bioworks as well. Edibles and vape pens are the biggest outlets for cannabinoids grown from chemoautotrophs, as lab-grown meat is one of the largest major markets for cellular agriculture.