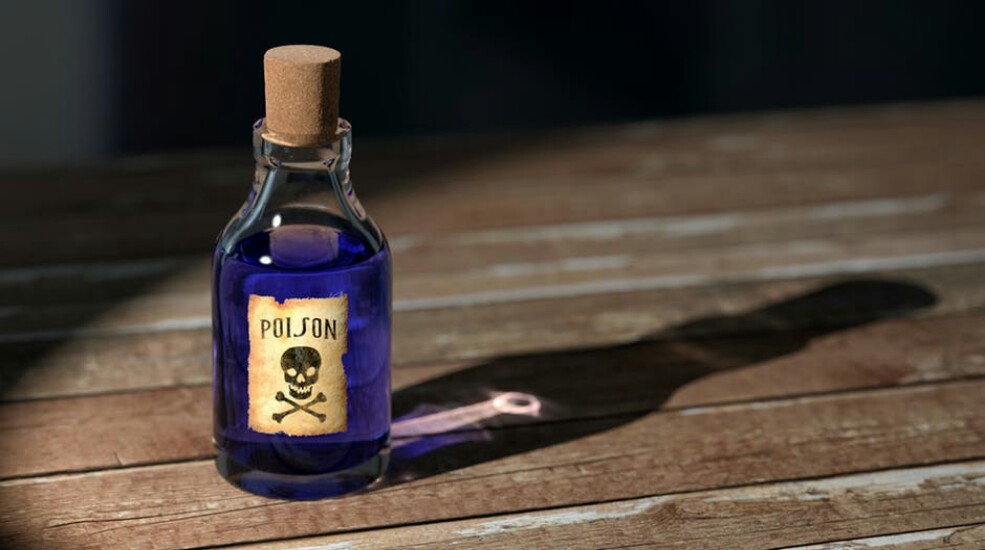 Cannabis is hardly a poison or even capable of inducing toxicity, yet regulators cannot seem to get a grip on the definitions that truly define this plant. They speak as if consuming too many cannabis edibles is the equivalent of dropping acid despite so few empirological cases of cannabis intoxication causing serious harm. In the few cannabis-related incidents that exist there are clearly other factors, some are most likely misconstrued toxicology reports falsely pinning unrelated cannabis use as the suspect. Overconsumption can happen, definitely, and THC can induce intense psychoactivity in some people, especially when eating large amounts without any fat, such as a handful of gummies. This does not mean however that cannabis can lead to ‘poisoning.’

Poisons and toxins are things that cause physical damage to our bodies, leading to injury or death. Cannabis, in no way, fits this definition. A bail of weed can fall on top of a person, crushing them to death, but the ingestion of phytocannabinoids, and cannabis’s organic compounds, will not severely poison a person unless they are allergic to the plant.

Cannabis is less toxic than cortisol, which the body produces after excessive exercise or stress. Overuse will excite the body’s endocannabinoid system, lowering the brain’s activity as well as relaxing the body and blood vessels. It does not lower activity in the center of the brain that controls breathing so it will not lead to death in the way that opioids do. The fact that it does relax the vascular system can be a problem however, if the brain stops receiving enough blood. This can cause a new consumer to green out, which mimics the effect of standing up too fast. Under rare circumstances, they can fall and injure themselves. Most people though, find themselves slowly laying down as the cannabis onsets which safely brings them to a horizontal position. From here, the body can begin to get enough blood back to the brain.

Greening out, known as orthostatic hypotension can be stressful on the heart due to this relaxed blood pressure. Despite this, cannabis has internal defense mechanisms that protect from its own negative symptoms.

Hunting for a suspect pathway

Benzodiazepines are powerful forms of selective GABA reuptake inhibitors that are given to individuals during a psychedelic overdose, as well as cannabis overconsumption. Cannabinoids themselves already lead to bliss through a related but more mild effect on GABA. Based on other effects of THC, CBD and terpenes are likely far better treatments for “acute cannabinoid intoxication” as opposed to benzos.

THC is infamous for its effects on short term memory. This is largely attributed to the inhibition of acetylcholine (ACH,) which can affect each person differently. A lack of ACH can stop the body from communicating with itself as clearly, which can be beneficial in a variety of medicinal cases. Alternatively, acute ACH inhibition can lead to side effects that might explain at least some of THC’s negative attributes. Euphoria, agitation, incoherence, rapid heart rate, and a drop in blood pressure are a few symptoms of “acute anticholinergic syndrome,” a reversible toxicity. These do fit some of the characteristics of cannabinoid “overdose.”

The terpene, alpha-pinene (and possibly terpinolene) counteract THC’s effect on short term memory by protecting ACH, which this hyperactive writing author is personally not keen on. Researcher Ethan Russo on the other hand, has a fondness for pinene-use. This is due to the fact that in the event adverse effects do occur after overconsuming THC, they can be balanced with pinene. In contrast, though, heightened levels of acetylcholine can cause its own severe side effects, toxicity, and possibly ameliorate Cannabis Hyperemesis Syndrome.

Individual fine-tuning of the entourage effect with various terpenes might be required to bring ACH to homeostasis with THC-dominant strains.

Messenger proteins are largely regulated by endogenous and phytocannabinoids. THC inhibits a signaling pathway known as cAMP, used by the messengers, adenylate cyclase and PKA. This pathway has many functions, including a multifaceted effect on the heart and vascular system. Inhibiting the cAMP pathway will typically lead vasodilation in the heart, which is generally regarded as therapeutic. In cases of extreme inhibition, acute hypotension can cause stress and damage, as noted in the event of orthostatic hypotension. In contrast, inhibition of the cAMP pathway does constrict smooth muscle and indirectly possesses cardiovascular stimulant properties. The endocannabinoid system can manipulate the opposing layers embedded into this pathway, allowing the ECS to balance between hypo and hypertension.

Further vasodilation within the cannabimimetic response is facilitated by glutamate inhibition. THC and endocannabinoids are only partial inhibitors of glutamate, hence their benefit for neurological conditions, such as migraines. Glutamate manifests activity in the brain that, in excess, leads to toxic damage. The same is true for the upregulation of intercellular calcium. Cannabis directly prevents this form of poisoning, known as excitotoxicity.

Glutamate inhibition and calcium downregulation can lead to sedation, a slowed heart rate, vasodilation, a lack of cognition, and even fear. Some of these side effects can fit into the definition of cannabinoid “toxicity” yet those effects are not typically toxic from the affinity of phytocannabinoids.

An acute overdose of certain pharmaceutical glutamate antagonists, such as Memantine can lead to toxicity due to extreme vasodilation, and even temporary hallucinations and psychosis. Only in rare genetic predispositions can cannabinoids target the right type of glutamate receptor in the correct area of the brain to produce as prominent of a negative psychoactive effect. Cannabis over-consumption typically only induces anxiety, not paranoia, but does affect the vascular system. However, a cannabimimetic-induced loss of blood pressure can never be accurately defined as a form of ‘toxicity’ due to the regulatory effect of the ECS, unlike pharmaceuticals or even synthetic cannabinoids.

Cannabinoids produced by nature, in the plant or naturally in our brains are limited to a certain potency, even with the discovery of the new highly potent tetrahydrocannabiphorol (THCP.) Artificial cannabinoids, on the other hand, can be engineered into incredibly strong ‘super agonists.’ Powerful, unnatural CB1 receptor agonists may not always function the same either. Molecules designed by a computer algorithm can target unique systems and signaling pathways not related to the properties of cannabis.

Like pharmaceuticals, synthetic cannabinoids can potentially block neurotransmitters to the point of intense cardiotoxicity, and even psychosis. Phytocannabinoids can be uncomfortable but not poisonous like artificial compounds.

The endocannabinoid system has many neuroprotectant properties, resisting damage from the environment. To label an anti-bacterial, neuroprotectant that prevents excitotoxicity a poison either disrespects the English language or scientific integrity. To place unwarranted fear on a medicine that can potentially nurse a person back to health is more dangerous than falsely advertising that medicines usefulness. Cannabis is not a miracle drug. Overuse of THC can cause the body to drastically seek survival or alternatively, catalyst the loss of ambition. It can bring on temporary fear, especially for those genetically predisposed to psychosis.

Despite all these warnings, cannabis is not concernedly toxic. The term ‘cannabinoid poisoning’ is lossless and lazy. It is an ignorant attempt at defining the symptoms of ‘acute intoxication;’ a better term already used to define the effects of certain glutamate inhibitors and other drugs that are not advertently toxic.