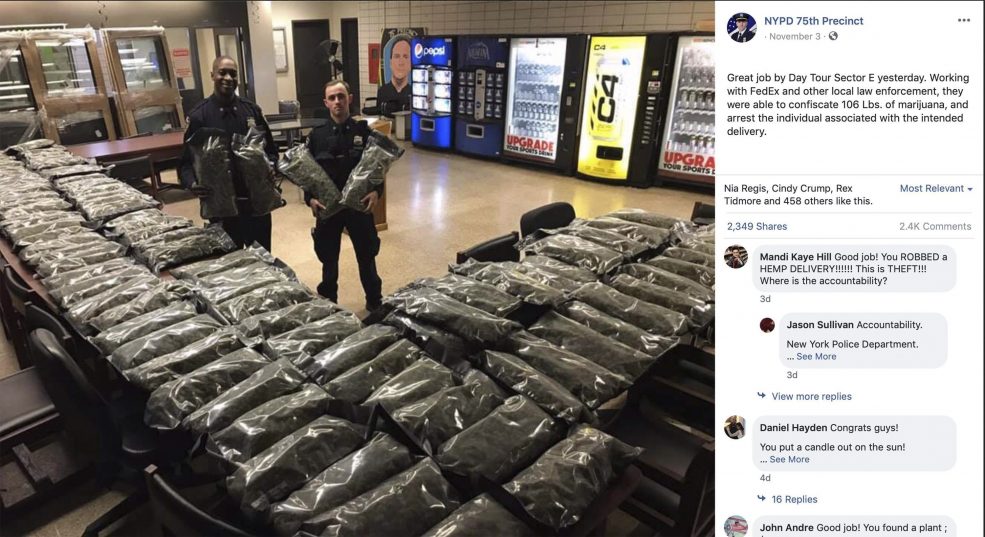 Pot or not? Busts highlight growing confusion over hemp

NEW YORK — The CBD craze is leaving the war on drugs a bit dazed and confused.

The extract that’s been showing up in everything from candy to coffee is legally derived from hemp plants, which look and smell an awful lot like that other cannabis — marijuana. They’re so similar, police officers and the field tests they use on suspected drugs sometimes can’t tell the difference.

Case in point, New York City police boasted on social media this week about what seemed like a significant drug bust: 106 pounds (48 kilograms) of funky, green plants that officers thought sure seemed like marijuana.

But the Vermont farm that grew the plants and the Brooklyn CBD shop that ordered them insisted they’re actually industrial hemp, and perfectly legal. And, they said, they have paperwork to prove it.

Nevertheless, when the shop’s owner brother went to the police station to straighten things out, he was arrested. Police said a field test had come back positive for marijuana.

Shop owner Oren Levy said that’s likely because hemp often tests positive for a permissible, trace amount of THC, or tetrahydrocannabinol, which is the chemical in cannabis that causes people to get high.

Field tests used by law enforcement officers can detect THC but aren’t sophisticated enough to specify whether a shipment is legal hemp or low-grade illegal pot, and drug-sniffing dogs will alert on both.

“He was a hungry cop. He thought he had the bust of the day,” said Levy, whose Green Angel CBD NYC sells oils, teas and other products containing the extract. He said he fears the seizure could force him out of business.

CBD, or cannabidiol, is also found in marijuana but does not have a psychoactive effect. Some people say it provides them with pain and anxiety relief.

Oren and Ronen Levy are not alone.

Since the U.S. government removed industrial hemp last year from the list of illegal drugs, a number of similar cases have cropped up across the country.

In July, a man who said he was delivering 300 pounds (136 kilograms) of hemp to a Minnesota CBD-oil processing company was arrested in South Dakota after authorities there said it tested positive for THC. The substance “looked and smelled like raw marijuana,” a state trooper said.

In January, Idaho authorities arrested a truck driver and seized nearly 7,000 pounds (3,175 kilograms) of what they believed to be marijuana, even though the company shipping the material said accompanying paperwork made clear it was industrial hemp.

At two other truckers and two security guards involved in transporting industrial hemp have been arrested and charged with felony drug trafficking. In May, the U.S. Agriculture Department sent a memorandum instructing states not to block the transportation of hemp that contains 0.3% or less THC.

The Nov. 2 Brooklyn bust that landed Ronen Levy in handcuffs stemmed from a tip from a FedEx worker who suspected the load of plants on their way from Fox Holler Farms in Fair Haven, Vermont, to Levy’s shop were marijuana, New York City police said.

“We got information about a large package of drugs. We got it in here. We field tested it as marijuana, called the individual in. He was placed under arrest,” said NYPD Chief of Department Terence Monahan.

“It is currently at the lab at this point to make a final determination, was it hemp?” Monahan said. “The individual had no bill of lading justifying its delivery.”

Ronen Levy, who runs his own CBD business catering to pets, pleaded not guilty to multiple counts of felony criminal possession of marijuana. He was released on his own recognizance and is due back in court on Nov. 19.

The police department drew attention to the bust by posting pictures on its official Facebook and Twitter accounts showing the officers in a room full of the seized plants. Oren Levy and the farm fought back with posts of their own.

Fox Holler Farms said in a statement posted on its Facebook page that the shipment bound for Levy’s shop was fully compliant with Vermont, New York and federal laws.

The farm’s lawyer, Timothy Fair, said that before the hemp shipment left Vermont, it was tested at FedEx’s request by a local police department. The level of THC was less than half the allowable threshold, he said.

A FedEx spokeswoman said even if the plants were hemp, they should not have been shipped using its service. The company’s service guide lists hemp plants, leaves, oil and CBD derived from hemp among its prohibited items.

Oren Levy said he would’ve gone to the police station himself but couldn’t because he was recovering from a recent surgery. Soon enough, Oren Levy said, Ronen texted him: “I think I’m getting arrested.”

“They treated him like a drug dealer,” Oren Levy said. “He’s never been to jail in his whole life. He still hasn’t slept. He’s paranoid.”