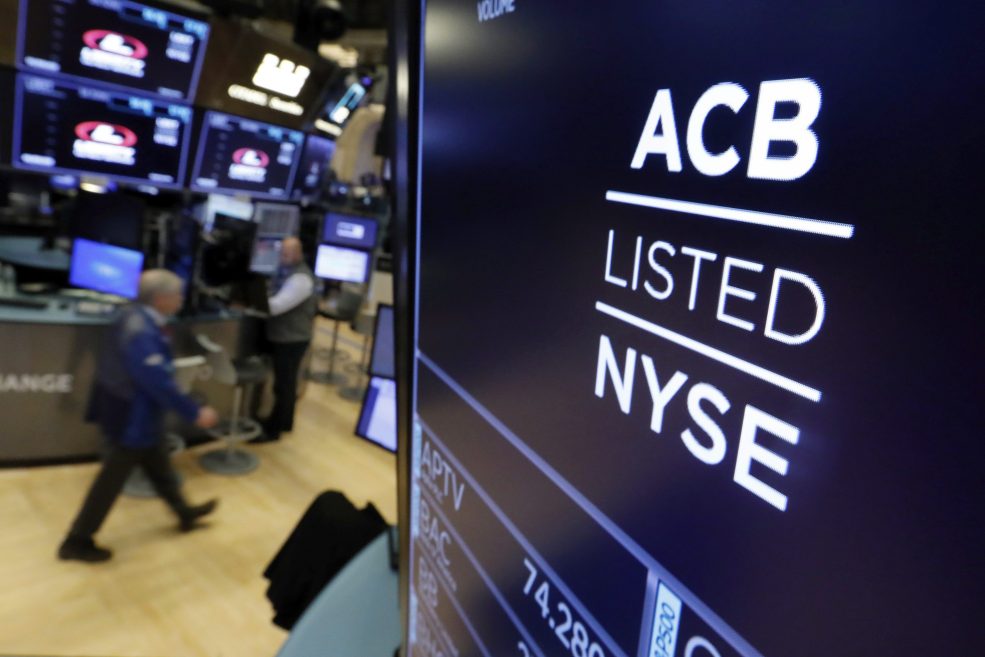 Aurora Cannabis Inc. shares sank to a two-year low Friday after its revenues missed expectations and the pot producer announced it was halting construction of two production facilities to save over $190 million in planned expenses.

The Edmonton-based company’s shares fell to a low of $3.59 and were down 51 cents or 11.6 percent at $3.87 in afternoon trading on the Toronto Stock Exchange.

Aurora announced after markets closed on Thursday that it will immediately cease construction of its Aurora Nordic 2 facility in Denmark to save about $80 million over the next year, as well as indefinitely defer completion of construction and commissioning at its Aurora Sun facility in Alberta to conserve $110 million.

The company said it is adjusting the construction timeline for both facilities to more closely align with its expectations for the timing of increasing Canadian and international demand.

“The past few months have been challenging for the broader cannabis industry between issues of governance, evolving consumer demand, and provincial retail bottlenecks, there’s been no shortage of negative news,” added chief corporate officer Cameron Battley.

“That said, I want to reiterate that our view of the opportunity in the Canadian and global cannabis industry is still extremely robust. It’s important to remind ourselves that the Canadian consumer market is just over a year old. These issues will take a little time to resolve. But in the end, we’ll be a stronger business because of it.”

Aurora missed expectations as its adjusted earnings before interest, depreciation, and amortization (EBITDA) was negative $39.7 million for its first quarter of fiscal 2020. That compared with a loss of $67.6 million a year earlier and a loss of $11.7 million the fourth quarter ended in June.

Revenues were $75.3 million in the first quarter, up from $29.7 million for the same quarter last year, but down from the $94.6 million in the prior quarter.

Analysts had expected adjusted EBITDA loss of $18.6 million and revenue of $93.31 million, according to financial markets data firm Refinitiv.

While medical marijuana sales grew three percent from the fourth quarter as the number of patients hit a record 91,000, consumer cannabis sales dropped 33 percent on slowing demand from provinces as they work through high inventory levels.

Analyst John Chu of Desjardins Capital Markets slashed his target price for Aurora by more than half to $6.50 per share after cutting his sales and EBITDA forecasts following Aurora’s release of its first-quarter results.

“We still believe there remains tremendous growth in the sector and have maintained similar year-over-year sales growth rate estimates for our fiscal year 2021-2023 forecast periods, but operating off a lower base following the soft first-quarter results,” he wrote in a report, adding that he’s maintaining his buy rating.

“Aurora is generating industry-leading gross margins, improving cost per gram and has award-winning strains that should continue to resonate with consumers.”

Despite some of the negative results, Battley said its cash cost to produce fell 25 percent to 85 cents per gram, the average net selling price per gram was up seven percent, kilograms produced climbed 43 percent to 41,436 kilograms and its gross margin was stable at 58 percent “which is head and shoulders above our peers.”

Based on these returns, Aurora says it would need to generate $130 million of revenue to become profitable, less than half the total that would be required by a comparable company earning lower margins.

The company said it is preparing to supply new products, referred to as Cannabis 2.0, that has recently become legal that it says will help to reduce the illegal market.

I’m excited as hell about 2.0,” said Booth. “I know I’m supposed to be told be conservative, Terry, but I really am pumped about how Aurora has done its job and getting ready for 2.0. And all indicators from our retailers, from our provinces, from Health Canada and all the little hints that you hearsays that Aurora is at the top of that pack as well. So we’re pretty pumped.”