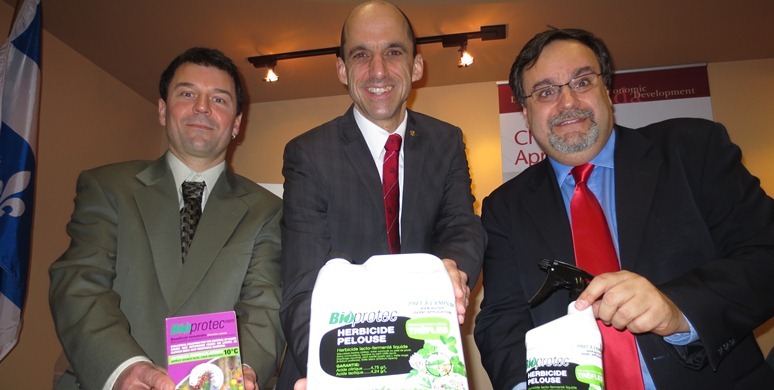 Did you know that two pesticide companies collectively own 12 out of the now 28 pesticides approved by the Canadian government, at the time of writing? Making matters even worse is that the two companies, AEF Global (Levis, QC) and Bioworks Inc. (Victor, NY), are partners in international business and distribution.

But that’s not all. Bioworks Inc. also aids Lam Corporation in distributing two other government-approved pesticides, as well as a pesticide not permitted for cannabis use, Cease, for Bayer Environmental Sciences.

Certain public information regarding AEF Global’s production practices belongs to other licensing partners like FPInnovations, a major Canadian forestry science and technology firm. Various inert ingredients developed through nano-technology and cellulose derivatives have been patented by FPInnovations, which AEF has access to and FPInnovations’ pockets are filled with a variety of companies‘ cheque books, and even some government hands!

AEF Global has been no exception to political gains, having received a $100,000 grant from the Canadian government for biopesticide development back in January 2014 under the Conservative government. This money was for building a stronger general exporter as well as an ‘agricultural’ industry through Quebec‘s Economic Development Program. At the time, Bioworks Inc. were AEF’s well-known international partners in distribution.

Grant funding did come in at the beginning of the new year, so why any suspicions?

It also came less than four months after licensed cannabis production began. More specifically, just over a month after Tweed gained their license.

Taking into account this grant was in part passed by then Conservative Public Safety Minister Steven Blaney (Levis, QC,) propels the situation into a potentially personal affair. That’s because Levis, Quebec is not only the headquarters for AEF Global- it’s also the riding that Mr. Blaney has represented in the House of Commons since 2006.

In 2015, Vancouver’s innocent dispensaries were accused of being harmful to society, according to comments made by the Public Safety Minister Steven Blaney, alongside the then-acting Health Minister, Rona Ambrose. Two years after the Conservatives lost the federal election in 2015, Mr. Blaney,
now acting as the official Opposition, openly opposed adult-use cannabis, citing Canada’s lack of preparedness. He also supported MADD’s opinions on cannabis-impaired driving, in 2018.

More importantly though, was Blaney’s colourful opposition to former Liberal CFO, Chuck Rifici, taking on the position as CEO of cannabis producer, Tweed. After pointing out Chuck Rifici’s connections to the Liberal Party, Canopy Growth, TWEED, Aurora Cannabis, and Cannabis Wheaton, Mr. Blaney said it was clear that:

Politicians and their secret agendas

In 2017, Mr. Blaney tried calling out the Liberals for having a ‘secret agenda’ regarding the implementation of legal cannabis, going so far as using the term “cash cow cronies”- an accusation he may not have been wrong about by any means. In fact, many consumers and advocates agree with him and still do today. We must ask though, what was his own secret cannabis agenda? What was the reason for keeping cannabis confined to medical production?

Was the Conservative politician planning on earning a buck off of cannabis sanitation practices by funding a pesticide company based in his hometown? Did Blaney manipulate a method to ensure our innocent plant is covered in his friend’s bioengineering chemicals? Or, was he simply attempting to put his own hands into something he feared losing control over?

An answer may be jealousy over the Liberal’s profiting in a way that mocked his own morals because he viewed recreational cannabis as a threat to public safety. In the end, he did financially benefit his own local constituents. He may not have been responsible for directly regulating the Pest Control Products Act, but given his government position, he certainly had influences in its alterations.

Years later, politics has effectively killed cannabis’ quality. Unless that was there intention all along. Did pitting Biopesticides against the buds consequently destroy the industry? Nonetheless, in the end, the black market is profiting. Your fears are now proliferating Mr. Blaney, regardless of your initial intention.

I know how “connoisseurs” talk about quality, and it may seem ridiculous to those outside of the cannabis community. Well, the legal system’s lack of quality combined with the many supply and access problems are the primary reasons the black market has been beating the legal industry threefold.

You can consider it a win and celebrate, we understand. There is a story that goes beyond millions of lost taxpayer dollars, though.

We also must realize that this legal ditch-weed kills our international viability. More nations will be legalizing cannabis, leading to its transition into an international commodity. A market a country can dominate or be swallowed by.

Let’s not let Great Canadian Cannabis be swallowed by American and Mexican markets!

We had a head start but that has already been lost. We can blame the Liberals running the legal industry with a lossless intent of profit, while the Conservatives were likely fighting against them with the biopesticide industry.

Considering pesticide label instructions are never meant for cannabis consumption methods, we all should think deeply on a particular comment Mr. Blaney made back in 2006,

“… when my father used to spray herbicides on the apple trees and the lawn without taking any safety precautions… He would have to go to bed for two days afterward. Since then, he has followed the directions and he is much better.”

Aug, 2016 – ACMPR is brought into force, allowing home production. Legal medicinal cannabis is put further in the hands of the people and out of the governments’.

May, 2017 – Steven Blaney makes rash comments against recreational cannabis, remarking that the conservatives, “never supported,” this level of legalization.