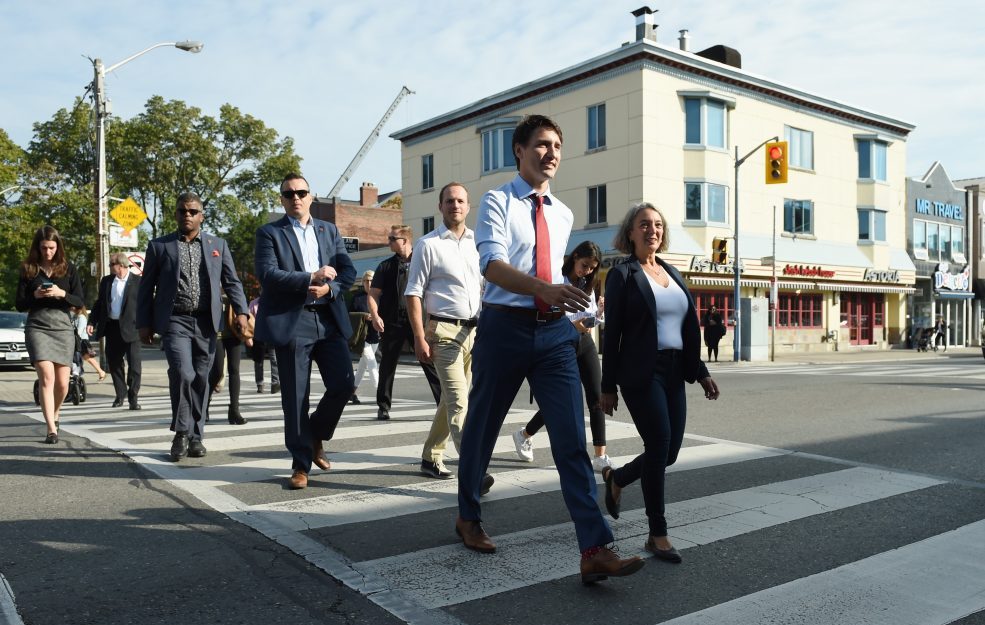 The Conservatives promised more robust support for Canada’s veterans, while the NDP pledged billions in funding to curb the effects of natural disasters on communities.

Campaign-trail discussion largely shifted back to meat-and-potatoes policy after a steady diet of fallout from Trudeau’s blackface scandal.

Recently discovered images showing Trudeau in black or brown makeup at costume events before he entered politics had dominated the last few days of the campaign — offending many, raising questions about the Liberal leader’s judgment and throwing his party’s re-election efforts into disarray.

Trudeau trekked to a residential neighbourhood in the ethnically diverse Toronto suburb of Brampton, Ont., to announce he would make the first $15,000 of income tax-free for most Canadians if given a new mandate.

The Liberals would raise the basic personal amount by almost $2,000 over four years for people earning under $147,000 a year. It would save the average family $585 a year, Trudeau said.

The announcement follows a pledge from Conservative Leader Andrew Scheer to cut the tax rate on the lowest federal income bracket (up to $47,630) to 13.75 per cent from 15 per cent over four years, which the party says would save a two-income couple earning average salaries about $850 a year.

Trudeau contrasted his plan with Scheer’s by emphasizing Canada’s wealthiest one per cent would not benefit at all from the Liberal tax cut.

“Our plan lowers taxes the most for people who make less, gives the middle class some breathing room and ensures that the wealthy don’t get an extra hand up,” Trudeau said.

The Liberal leader also promised to cut cellphone bills by 25 per cent. He said he would encourage companies to reduce their bills by that amount over the next two years, and if they are unable to meet that target, the Liberals would introduce further competition.

“Right now, Canadian cellphone plans are among the most expensive in the G7,” Trudeau said.

NDP Leader Jagmeet Singh, who has promised a price cap on cellphone and internet services as well as a telecom consumers’ bill of rights, chided Trudeau for promising to work with telecom firms.

“Again and again, Justin Trudeau says one thing to Canadians before the election but refuses to take on big corporations afterwards,” Singh said.

Scheer, meanwhile. ventured to Prince Edward Island to promise more support for veterans, hoping to reset the relationship between his party and the ex-military community after more than a decade of tensions with previous governments of all political stripes.

The Conservative leader said as prime minister he would clear a backlog of veterans’ benefit applications within two years and create a reliable pension system.

Scheer also promised to strengthen post-service transition supports, help more veterans get service dogs, enshrine in legislation a guarantee that every veteran is treated with respect and gets services in a timely manner and support commemoration projects such as the National Memorial for Canada’s War in Afghanistan.

“As prime minister I will take a personal interest in ensuring the commitments we made today are followed through on,” he said.

During a stop in Gatineau, Que., Singh pledged to add $2.5 billion to the federal government’s disaster mitigation fund. He said the idea is to help people — like those in west Quebec who recently faced severe flooding — avoid disasters and be able to stay in their current homes.

The federal government says an increasing number of Canadian communities have experienced significant weather-related events and disasters triggered by natural hazards such as floods, wildland fires and droughts — calamities that are becoming more frequent due to climate change.

Singh said “we can’t just close our eyes” to the prospect of more weather-related disasters.

Green Leader Elizabeth May had no big plans Sunday other than a fundraiser in Victoria.

May was in Winnipeg on Saturday to talk up her party’s plans to combat the opioid crisis by decriminalizing drug possession and improving social supports for people who use drugs.

Asked about the proposal Sunday, Scheer said while he would not recriminalize possession of small amounts of marijuana, the Conservatives think making other drugs legal is a bad idea.