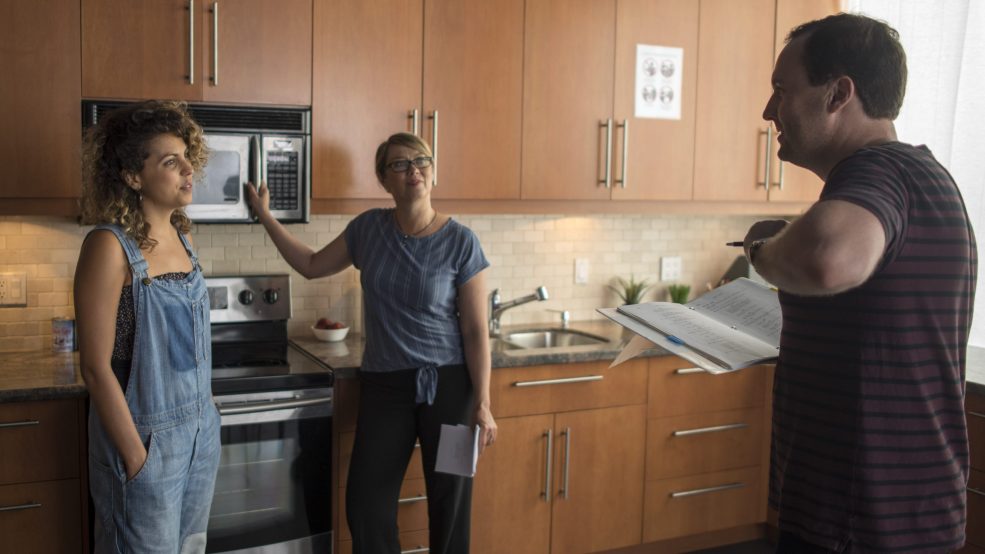 He had a tiny $10,000 budget and just nine days to shoot. Between writing, directing and working a corporate job, he also took on housekeeping tasks such as providing food for the minimal crew, even cleaning the toilet on set.

Not to mention the time all his props and costumes spilled out onto a busy downtown street, stopping traffic and streetcars while he and producer Ashleigh Rains picked them up.

Or when the Ontario government changed its approach to the cannabis regulation and distribution system in summer 2018, and Sabbagh had to quickly rewrite the ending so it would make sense.

“Canadian Strain” was supposed to hit theatres last Friday, but mass cinema closures and social distancing measures during the pandemic forced the film’s team to quickly pivot and put it straight to video-on-demand platforms, including iTunes.

Sabbagh says the industry is still trying to make sense of it all, and he’s sad for independent Canadian theatres and others losing business.

But he’s optimistic his film will provide a humorous escape from the news cycle for self-quarantined audiences.

“I see artists out there now from all over the world putting out content to help people get by, and it’s exciting that our movie is part of that now,” Sabbagh said in a recent phone interview.

Salgueiro is hopeful the “fun and cozy” tone of the film will be a “pandemic panic medicine” of sorts for viewers.

“Now people can chill and possibly indulge in some of what this film is talking about at home and just take it easy,” the former TIFF Rising Star said with a laugh.

“I think now there’s, in a crazy way, possibly more of an audience, because people need content right now to consume in trying to find something to do. And this is just such a perfect relief.”

“Canadian Strain” stars Salgueiro as Anne Banting, a passionate cannabis dealer who fought for legalization, thinking it would help entrepreneurs like herself.

But Anne finds herself out of business as the Ontario government takes over, first with plans for provincially run brick-and-mortar cannabis stores and then shifting to being an online retailer and sole legal wholesale distributor for private retail stores.

Sabbagh said he was never a cannabis user but wondered what would happen to dealers when it became legal here.

Having come from a family of entrepreneurs, Sabbagh already knew the ups and downs of being a small business owner competing against big corporations.

“Then when the government formed a committee around how to deal weed, the comedy just took care of itself,” he said.

Still, he wanted to add nuance and feature cannabis enthusiasts using it for myriad reasons.

“I didn’t want to make another ‘Cheech and Chong’ movie. Those movies have been done. So I really focused in on an adult version of a cannabis movie that I didn’t think existed.”

Salgueiro said she also comes from a family of small-business owners and was drawn to the care and attention her character put into her cannabis business.

“Also the fact that I’m playing a female dealer and I’ve never seen that before ever,” she said. “Pretty much all the dealers in the film are women.”

Salgueiro is seen smoking cannabis in the film, but in real life it was herbal cigarettes.

“There is no way we would have filmed it in nine days if I was actually smoking cannabis on set,” she said with a laugh.

Sabbagh and the cast helped roll the cigarettes, while his wife created bags of fake weed using oregano and other herbs.

Sabbagh also made the film with a cinematographer, a sound professional and occasionally a wardrobe person. The actors had to do their own hair and makeup.

Mochrie arrived early on set for his first scene and Sabbagh recalls telling him, “You’re one of my comedic heroes” followed by: “I’ll be right back, here’s a coffee. I’ve got to go set up your room, get your clothes out, iron your costume, set up crafts and then clean the toilet.”

“So basically I’m scrubbing the toilet in front of Colin Mochrie,” Sabbagh laughed.

“That would make my mom proud. That’s filmmaking for you, right there — scrubbing it really clean while Colin Mochrie is drinking coffee and chatting, basically.”