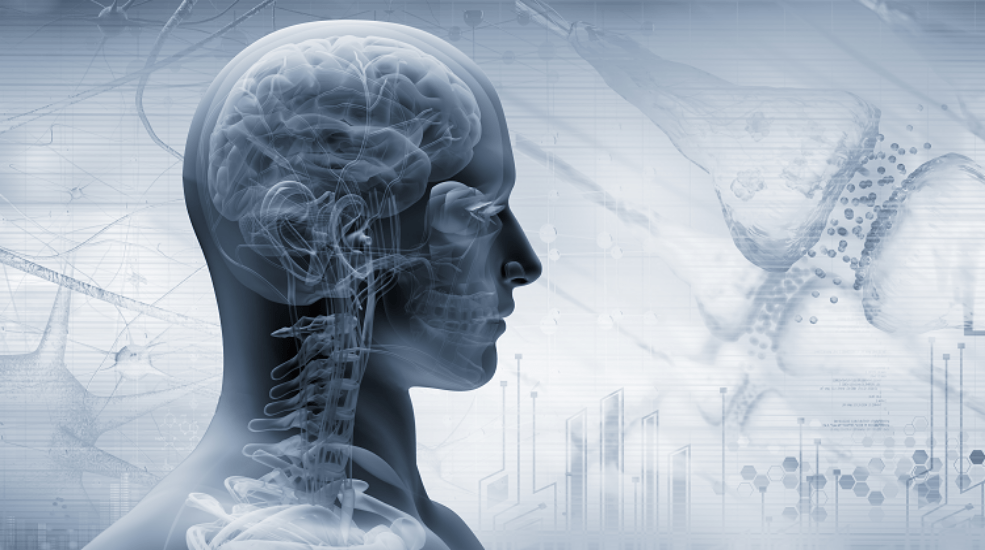 We recently explored a possible lead to some migraine headaches and how deficiencies in the Endocannabinoid System (ECS) can be responsible for them. The brainstem both triggers and responds to migraine, which is how the gut’s nervous system becomes connected not only as an effect in the form of nausea but a cause as well.

Occasionally, migraineurs experience a stiff neck before an attack. An acute level of inflammatory agents released around the brain stem by degraded endocannabinoids can easily result in tense neck muscles. ECS degradation can be caused by many external stresses, with the brain stem as a focal point for several sectors of the nervous system. Signals fired through nerves will generally become overactive once those regulating endocannabinoids are lost.

Degraded guardians of the nerves

Endocannabinoids act like guardians of the immune and nervous systems. Transmitters like calcium and glutamate are sent out like children to do chores but can be distracted or even hyperactive at times, especially when the adults (anandamide and 2-AG) are sick and do not have the ability to properly maintain the kid’s energy. Overactive nerves can in turn exhaust the endocannabinoids, leading to unregulated behavior in other connected regions.

It is possible for the gut’s nervous system to wear out the ECS as retaliation for being poorly treated and neglected. Exhausted after responding to the gut, the endocannabinoids can easily metabolize into certain inflammatory agents. Once metabolites build-up, the brain stem will no longer be able to defend itself until finally, a migraine attack occurs. On the other end of the cycle, the migraine attack can wear down ECs in the brain stem, subsequently disrupting the gut’s nervous system, resulting in nausea.

Many neurotransmitters are responsible for shuttling messages of pain through nerve endings and peripheral fibers. Dopamine and glutamate’s relationship was previously explained to some extent. Indica strains can help with migraines more often than Sativas, not to say these varieties of cannabis can truly be distinguished by their effects.

One study, however, has reported that Sativa dominant strains carry the terpene terpinolene more often than Indica cultivars. This herbaceous, floral terpene with a hint of pine stops the degradation of a transmitter known as acetylcholine (ACH.) Like dopamine, ACH directly agonizes the Vomit Center. More unique though, is ACH’s direct role in signals fired through the gut’s nerve endings. Terpinolene and also pinene are terpenes that should be avoided during a migraine attack for most individuals.

Another study by Canadian researchers on the entourage effect of varying chemovars predominantly selected from Whistler Medical Marijuana Corporation showed terpinolene to be the least effective terpene for analgesia patients.

THC and the terpene linalool rather directly inhibit ACH, while also gently subduing the excitatory transmitter, glutamate. Another infamous transmitter modulated by linalool, as well as limonene is serotonin. Several types of receptors control this anti-depressant transmitter, all of which are directly involved in migraine and nausea through the trigeminal and vagus nerves.

Serotonin and nausea – depression beyond the mind

The first type (HT1) is involved throughout migraine with and without aura, the second (5H2) has a relationship with headaches preliminary stages. The third (HT3) is a major trigger for nausea. Anandamide reputakes 5HT1a, inhibits 5HT2a, and antagonizes 5HT3a.

Serotonin not only enables the nervous system to communicate, but it also constricts blood vessels. Low levels of serotonin will lead to vasodilation, which in excess, can cause migraines. 5HT1a reuptake inhibitors such as CBDA, CBD, anandamide, or limonene can be used to treat migraines. Whereas, 5HT3a antagonists target the gut and might be beneficial for an active attack with nausea, although they might be difficult to use. Migraine requires a complex well-timed balance of treatments, unfortunately, because the condition fluctuates from vasodilation to vasoconstriction. Serotonin blockers can instead cause migraines if they are used on their own at an inappropriate time of an attack.

Ondansetron blocks serotonin through 5HT3a antagonism, a pharmaceutical drug commonly used for nausea during chemotherapy. Side effects for these types of drugs include ischemic colitis and even headaches. Unlike selective pharmaceuticals, the endocannabinoid system works on three layers of serotonin receptors in a way the enables homeostatic therapy to occur without harm. The ECS rather flexes with the serotonin system as the body demands, like a well orchestrated dance. A depleted level of anandamide would leave the dance floor a place of chaos with a desperate, lonely serotonin left in solitude on center stage, unable to perform. A gut that showcases a poor performance by serotonin will surely be left with a bad case of butterflies.

The vagus – our digestion defines us

The vagus nerve is long and well connected but trapped in an entanglement with the cannabinoid system. Neurotransmitters responsible for activating facial nerves are also necessary for the gut’s internal communication. The brain, skin, and gut need to talk to each other to regulate the body’s microbiome and to keep the vagus nerve happy. Nausea will ensue once the transmitters enable their overactive communication.

The ECS will bring the gut back to a homeostatic state, a relationship that travels deep beyond the nervous system.

ROS and NOx in the deep gut

Anandamide is known to regulate the headache inducing transmitter, nitric oxide (NOx,) but CBD has the independent ability to regulate NOx more efficiently in some parts of the body. One of these is CBD’s inhibitory effect on an enzyme, CYP450 in the liver. Certain analogs of this enzyme are known to bind Free Radical Oxygen and Nitrogen Species together to form nitric oxide. Inhibition of CYP450 will bring up intercellular ROS and RNS, consequently knocking down NOx.

Beyond a canna-diet, other natural foods will inhibit this enzyme, strawberries weakly and grapefruit juice more potently. Despite their natural presence, precautions should be taken when using any CYP450 antagonists while taking other medications. Even grapefruit juice and CBD can affect the metabolism of other drugs, like Ondansetron. Cannabinoids typically mix well with most medications, but you should consult your doctor for the best advice for you. CBD may also respond poorly with migraineurs due to vascular pressure around the face.

Anandamide (AEA) is a critical facet of migraine attacks, one of two primary endocannabinoids that can degrade and release inflammatory agents. CBD ultimately protects anandamide from breaking down and so it may be a necessary therapy for certain migraineurs. Others, such as this writing author, may find difficulty with CBD due to unpleasant eye pressure.

CBD raises inner ocular pressure due to the localization of anandamide’s metabolite in the eye. Increased pressure can subsequently put a strain on blood vessels in the face which can actually induce headaches, rather than aid them.

Layers in an entourages balance – CB3 a receptor for CBD

CBD’s negative side effects on eye pressure might be countered by the CB2 receptor agonist, caryophyllene, according to the writing author’s personal experience. One reason for this benefit may lie within CBD’s effect on a third, mysterious cannabinoid receptor as much as it relies on the localization and effect of various CB2 receptors themselves. The prevailing ECS orphan is unofficially known as the ‘CB3’ receptor, officially as GPR55. This recently discovered regulator of sensitivity is now being studied as another cause of migraines. We will explore how CBD can provide therapeutic relief for migraine when used as part of an entourage blend with other terpenes and cannabinoids for this reason, in the final installment to this series.