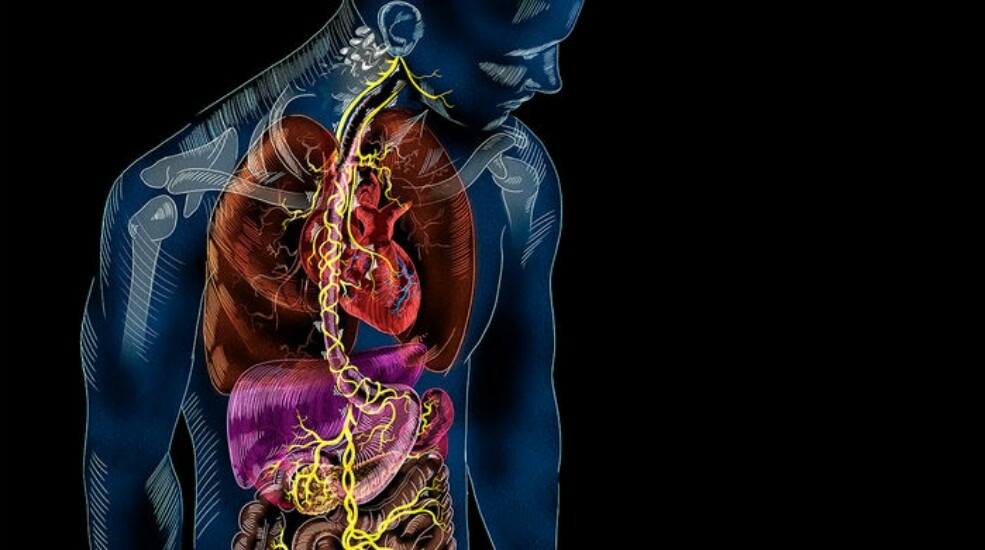 We recently proposed a theory explaining how a condition that induces intense pain and profuse vomiting after chronic use of cannabis, known as Cannabis Hyperemesis Syndrome (CHS), might function. Typically stories fluctuate in the realm of Refer Madness when they describe it as a “symptom” of THC itself. Many seem to think cannabinoids are the cause, a link since chronic consumers are the only ones who experience the condition. Yet, it is highly unlikely cannabis directly caused the condition; not if any victims did continue to subsequently use any kind of cannabis without ill effect, as was reported. Chronic use may still be related through through an association with a specific degenerative condition though.

What changes occur from cannabis use that can be linked to CHS,? Do any even make sense?

Chronic THC use – losses and gains

Chronic THC consumption does cause a tolerance to its effect, albeit temporary. This is typically the brain adjusting to THC-induced activity in the CB1 receptor; the infamous target of intoxication that is also indirectly associated with undisputed therapeutic potential. Tolerance essentially acts as a homeostatic gyroscope, keeping the activity of the cannabinoid system in check. However, the brain also adapts to large, continual doses of THC with a beautiful morphology of certain cells and synapses.

One change is in immune cells known as glial cells, which develop additional CB2 receptors during heavy cannabis use. These purely non-intoxicating cannabinoid receptors are known to predominantly support immune functions in the body, but also regulate neurological effects in the brain. Chronic cannabis users are unique due to their increased sensitivity to CB2 receptor agonists, like THC or the terpene, caryophyllene.

It is true that tolerance to THC will result in a loss of its intoxicating potency. At the same though, chronic use leads to a more calm, therapeutic effect due to these new microglial-bound CB2 receptors.

How exactly can the balance of cannabinoid receptors become upset?

People can carry dormant genetic alterations that lead to autoimmune and neurodegenerative diseases later in life, or after an episode of trauma. Generally speaking, this is not unusual, but specific variations and characteristics can be. Certain deficiencies in cannabinoid receptors themselves are not uncommon, either.

A chronic cannabis user with an unrelated degradation of glial cells in specific regions of the brain would ultimately lose their new CB2 receptors. Their homeostatic gyroscope would be thrown off, potentially leading to unique symptoms. Fortunately, though, that imbalance should not cause negative symptoms from THC, at least not those of CHS. Even if that degradation occurs in specific regions of the brain, such as the Chemoreceptor Trigger Zone (CTZ) and the ‘vomit center,’

There however does exist a rare CB1 receptor deficiency that can cause the body to respond to THC with reverse effects, as previously reported. A normal tone of CB2 receptors might protect the switch that flips THC’s effects in those unique circumstances. If CB2 receptors were lost due to an unrelated glial cell malfunction or degradation the trigger could become unblocked and flip, causing the symptoms of CHS.

Flipping the switch on THC

That “switch” has a few positions and can be triggered by CBD, but also by neurotransmitters like dopamine. Caryophyllene will not affect CB1 receptors directly but does have a peripheral effect by inhibiting dopamine through CB2 receptor agonism. This is how the terpene caryophyllene is capable of indirectly switching a deficient CB1 receptor back to normal.

For this effect to occur though, the CB1 receptor would also have to tightly co-express dopamine, which does happen, except that too is uncommon.

When a string of rare signalling deficits in the cannabinoid system aligns like lock pins by degraded glial cells, it is not necessarily caused by cannabis use. Yet, it will still affect chronic users in a profound, unique way. Furthermore, the condition can only subside on its own once the body is given time to readjust it’s own endogenous cannabimimetic gyroscope, not once THC leaves the system. This is supported by those empiriological cases of continued use.

Vomiting and nausea are caused by many different internal dysfunctions that range from within the gut to the deep inside brain. Cannabinoid receptors are located in most of these, including the ‘vomit center.’ Endocannabinoid system (ECs) activation acutely prevents emesis caused by the guts nervous system, similar to how it prevents migraines by suppressing hyperactive nerves in the face. An episode of powerful vomiting and discomfort would occur if the effects of the ECs were reversed in the Chemoreceptor Trigger Zone or Vagus nerve. In particular, if the inhibitory effect on several vomit-inducing transmitters such as dopamine, ACH, PKA, and 5HT3a were to flip their function.

Can the loss of CB2 receptors truly enable the renewal of a dormant relationship between CB1 receptors and dopamine, and is that renewal actually able to modulate CB1 receptors?

Unfortunately, the concept is nothing more than a hypothesis at this point. While the theory can be tested and proven, or otherwise, CHS certainly has other potential causes. A deficiency in the cannabinoid system that causes it to contort into an antagonist of itself appears to be one necessary piece of the puzzle. In another idea, it is the entire image.

Stay tuned to find out how immune disorders like thyroid and celiac are related to deficiencies in the CB2 receptor itself. Much like migraine, fibromyalgia, and IBD are related to CB1 receptor deficiencies. How are wheat and spicy peppers similar to each other, as well as other selective effects of THC in reverse?