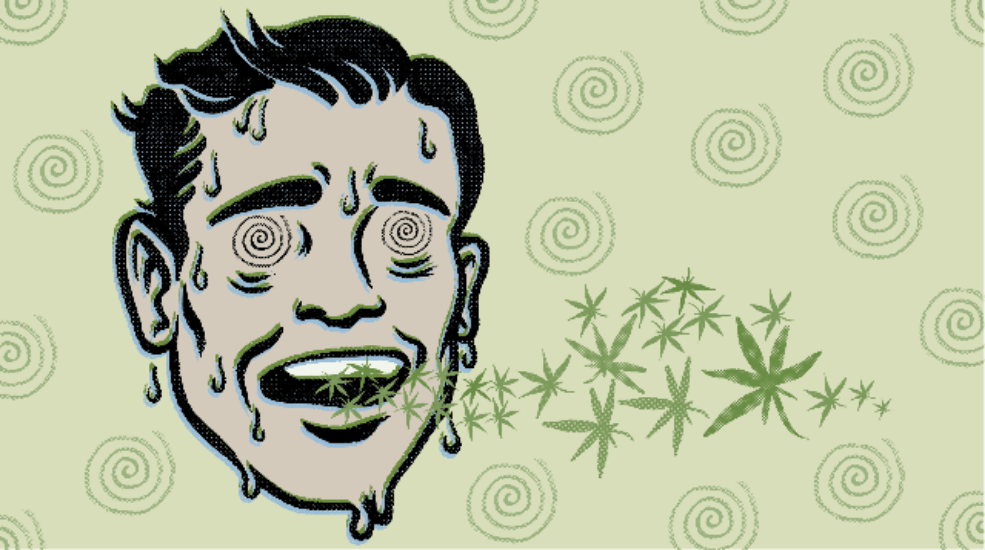 We recently explored the rare phenomenon that causes cannabis to induce profuse vomiting and excruciating pain, a condition that has been tagged Cannabis Hyperemesis Syndrome (CHS.) It is hard for some to believe this can happen, calling it refer madness; alternatively, some reports now claim Canada’s legal cannabis relieves CHS.

Well, call it what you want considering CHS has no real cause and effect truly defined for it. Nothing yet proves it as anything more than cyclic vomiting syndrome, unrelated to a person’s cannabis use history. We analyzed a theory to explain the mystery, one that involves abnormal signalling in a cannabinoid receptor. Preclinical analysis suggests that a shift in the receptor’s response to biased agonists, like THC can potentially cause pain and nausea with certain genetic presets. If that is true, then switching from an untested grey market to legal cannabis might have actually stopped their symptoms!

Ruling out pesticides and bacteria

The possibility that legal cannabis relieves CHS goes beyond bacteria and pesticides, despite popular beliefs. Health Canada‘s regulations and the ‘good ol’ word‘ of licensed producers ensures that Canada’s legal cannabis will not contain certain sprays that can be found in black market flower, such as neem oil. This pesticide is thought to cause CHS, but that too requires further investigation. Another culprit that advocates of large scale production point blame at is bacteria since legal weed contains less microscopic organisms than some black market buds. Health Canada has forced this by requiring producers to kill excess bacteria with irradiation. Bacteria aside, gamma or microwaves play another key role in explaining how legal pot helps CHS.

Irradiation is almost exclusively a licensed producer strategy. Sanitation methodology isolates the black and legal markets into two distinct categories. There are no safety studies that regard smoking irradiated products to know if there are any risks. Irradiation is used to destroy bacteria and contaminants rather than rely on strict, clean growing practices. It can also be used to dry cannabis as opposed to patiently curing fresh buds. Dr. Ethan Russo, a medical scientist renowned for his work in the cannabis field, is highly against irradiation. He instead promotes the use of clean culture, preferably outdoors or at least in a greenhouse for sanitation insurance.

Terpenes come in categories defined by their own structure, each with their own classification. Caryophyllene is in a heavier weight class with a higher vapour rate than some of the other major, lighter terpenes, like limonene and pinene, for example. Irradiation burns off more of these light terpenes compared to the heavy category. Less caryophyllene is destroyed after a session of irradiation, so its status moves up to primary terpene.

If you study the terpene profiles of Canada’s legal cannabis you will notice that beta-caryophyllene is unnaturally common. More so than in grey market cannabis found in the last few dispensaries fighting it out. Given what irradiation does to a chemovar it is clear that this sanitation practice is having a remarkable impact on the entourage effect of legal flower. Terpenes are likely more the answer as to why legal cannabis relieves CHS.

This means potential CHS sufferers that use homegrown should find an earthy, caryophyllene filled chemovar to grow.

Caryophyllene has a broad range of effects, some deeply sought after by pharmaceutical scientists who invested heavily in recreating them synthetically, only to fail. It is gastroprotective and gently activates a specific suite in the cannabinoid system, regulating gut health and immune functions. Another crucial role played by this terpene is the gentle inhibition of dopamine (D2 neurons) through the activation of a cannabinoid receptor (CB2.) Aside from TRPV1 activators like capsaicin and hot showers, dopamine inhibitors are one of the two remedies for CHS attacks.

Pinene, on the other hand, indirectly elevates a transmitter known as acetylcholine (ACH,) a chemical similar to dopamine. It elevates the signalling between immune and neurological responses. In turn, this helps chemicals and cannabinoids talk to the nervous system, elevating the sensitivity of CHS symptoms. It should be noted that many restricted pesticides do agonize ACH through an alternate, more direct and toxic path, whereas permitted sprays do not (at the time of writing.) Pinene, therefore, has the ability to counteract dopamine inhibition and CHS relief. Limonene and linalool rather increase dopamine levels more directly, on the contrary, this is via 5-HT uptake which also brings up serotonin, normally suppressing nausea.

Promoters of serotonin would suppress normal Cyclic Vomiting Syndrome but may aggravate CHS instead. Cannabigerol (CBG) a cannabinoid found more prominent in bud cut a week too early, suppresses serotonin through 5-HT1a antagonism. Is it possible that legal flower has been getting harvested a week prematurely to push production faster?

Once you compare their dopaminergic properties, caryophyllene dominant strains should have an apparently reduced impact on CHS compared to limonene or pinene dominant ones. Although, for licensed Canadian cannabis this is again due to the terpenes being unintentionally stripped out by irradiation, a strategy that destroys quality.

Beyond a dopamine inhibitor’s ability to suffice as one of the rare remedies for CHS, another consideration looms heavily that puts this neurotransmitter under a spotlight. Important is how dopamine modulates cannabinoid signalling, changing the brain’s reaction to THC in a similar way as CBD. Except, when dopamine bombards the cannabinoid receptor it completely takes over a signal’s gateway. This shifts the entire dynamic of the cannabinoid system which may be how THC turns an ugly cheek. By rare chance, it can begin to agonize instead of inhibiting different signals, and possibly aggravate instead of desensitizing noxious, pain-inducing channels. In other words, the shift in the cannabinoid receptor may be how Cannabis Hyperemesis Syndrome is caused, regardless if it occurs due to trauma, cocaine use, genetics, or cannabis use.

Cammabimetic activity typically mediates dopamine indirectly, without causing a dramatic spike or decrease. A multifaceted balance occurs upon THC’s activity, at least in most of us. In rare yet separate cases, CB1 receptor activity has been postulated to co-express an unusually close relationship with dopamine. This rare bond could cause a shift in cannabinoid signalling that is crucial for cannabis to produce a negative response. An alteration that can be reduced by a dopamine inhibitor. By this logic, caryophyllene as a D2 antagonist will reopen the cannabinoid receptor’s normal signalling pathway. If this true, then either illicit or legal cannabis relieves CHS the same, it simply depends on the strain and terpenes associated.

The victims that were reported to find relief after switching to legal cannabis seem to mostly need tested flower, not irradiated pot. They also should have a budtender that can guide them to a gastroprotective strain, which is restricted within the accessible market.

For anyone trying to avoid CHS, their best bet is to use properly bred caryophyllene dominant strains high in CBG, like Cookies (GSC.) A batch that was grown pesticide and fungicide free, flushed or faded, and loved. This might just solve the problems without needing to endure a scalding shower for an eternity. Without needing to strip terpenes, unintentionally leaving behind a gastroprotective dopamine inhibitor.

Breeders spend a lot of effort on developing strains with vital entourage effects built into a flowers genetics. They do this so the strains can be grown with the same amount of energy and respect, to ensure their phenotypic potential prospers. If one needs a profile not yet available, it can be achieved through care, respect, and highly skilled extraction. One can separate a strain and put it back together even better than before, but it is a great disrespect to strip out its parts with irradiation.

Perhaps legal weed can help CHS, but it is better to have access to information and to simply find better chemovars from a reliable, tested source. This exists in the free-market by a narrow thread, now. Unfortunately, the legal market can only provide limited relief through the accidents of irradiation. A question remains though, does legal cannabis relieve CHS, or is it caused by an odd, rare autoimmune disease much like thyroid and celiac disease? Follow along with CLN to find out more.