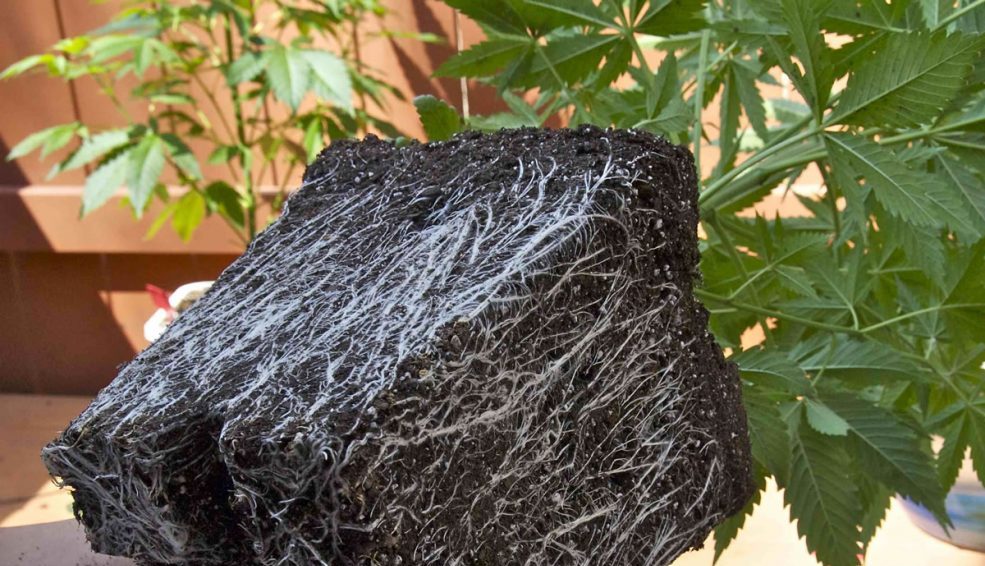 Cannabis Sprays Explored: Can A GMO Be Certified Organic?

We’ve already explored moulds that kill. They are known as ‘biological sprays.’ Next, we’ll look at genetically-modified pesticides and how some of these GMO’s are considered organic by Health Canada.

Two other species of these deadly moulds that have been permitted by Health Canada belong to Bioworks Inc., branded under the name Rootshield®. These moulds are Trichoderma Virens G-41 and Trichoderma Harzianum Rifai strain KRL AG2. The latter utilizes a designed release of hydrogen peroxide (H2O2) to do its dirty work. They may also produce secondary metabolites such as isocyanide.

A form of peroxide produced from a white-green mould will still be quite different than a grade not deemed safe for human consumption due to poisonous preservatives.

Sanitation can be thought of as chemotherapy for plants, as these agents sprayed on crops destroy the growth of damaging organisms, without killing the host.

Amazingly, this is true for Cannabis on its own, strictly with its rich terpene content. Terpenes can actually degrade and release H2O2 entirely on their own. Old weed essentially self-oxidizes. In a small amount, this is the plant’s regular breath. They do breathe out oxygen, after all. In a more extreme dose, this becomes a shocking state for the plant, damaging it and forcing it to defend itself sacrificially. Have you have ever wondered how tiny bite marks leave such vicious decay on a leaf?

Rootshield stimulates this shock state throughout its parasitic life span, just slightly more gently. Soft enough that adding a little to the roots is known to help a plant grow. In the buds, it’s best to rely on a terpene profile built from defensive breeding strategies.

Applying the permitted pesticide, Zerotol, is like a blast of radiation treatment. Rootshield is more like a constant Chemotherapy-drug delivery system brought to you by a genetically modified parasite.

How Organic is Biological?

Bioworks Inc. mutated a naturally occurring Trichoderma strain, T22. Then, they further modified this mutant by genetically breeding it into the KRL AG2 strain via protoplast fusion. Remarkably, the EPA recognizes Rootshield’s active ingredient as not only naturally occurring, it is certified organic by the Organic Materials Review Institute (OMRI.)

You heard that correctly- genetically modified fungi (and seeds) can be considered organic. Apparently, in Rootshield’s case, the original two strains of mould are simply a fused product, so they are considered organic – a hybridization. Bioworks’ fungal birth child is allegedly not from an indifferent lineage and its genes have supposedly not been altered by splicing. At least according to an official Canadian PMRA publication.

What about the patents?

That fused “biocontrol” agent was likely injected with a targeted and isolated nucleic acid molecule (DNA) of Aspergillus niger, a foreign black mould. This was done using conventional recombinant gene technology. The reason for doing so is a gene in Aspergillus Niger produces glucose oxidase (GOx), while Trichoderma does not. GOx is what produces hydrogen peroxide.

To force an organism to better produce a pest control agent, by inserting a gene sequence from an unnatural family – that everyone, is the technical language for classic genetic engineering.

It is about time OMRI, the EPA, and the Government of Canada start researching patent documents, before certifying any thing.

Where Did the Terps Go?

Regardless of the technicalities of nature and language, most of us avoid eating browned apples and really detest the thought of smoking sick weed. Spraying healthy cannabis with a predatory fungus as a means of prevention sounds like the regrettable assets of agriculture and national demand.

Below is a list of five sprays under the Rootshield brand:

Inert ingredients: 98.85 percent. This trade-secret recipe can include an aqueous solution, slurries, powders, and granules. Acceptable adjuvants are actually various fertilizers and other pesticides, or “mixtures thereof.” Polyethylene glycol is liberally used during Bioworks’ genetic processing and is a common surfactant.