Canada’s oldest compassion club, The Victoria Cannabis Buyers Club is fighting to survive, thanks to aggressive provincial enforcement. The non-profit club was raided in November 2109 and again in July of 2020. At the end of January, the VCBC received a letter from the CSU and a whopping $6.5 million dollar fine. Earlier this week, they went public with the fines and their plan to fight them, resulting in further enforcement action. The province is taking a letter of the law approach and delivering some heavy-handed hits, but given the situation, many feel this is unnecessary.

Over the years, there have been many attempts to close the VCBC. Including these most recent, they have been raided eight times. In November 2019 and July 2020, the non-profit dispensary was raided by the Community Safety Unit and all of the products were seized. Since then, the staff and its members have been anxiously waiting for the resulting consequences. The fines were calculated based on the total retail value of all the products seized. However, these numbers are based on the recreational retail value, not what it costs for a medical patient. This is significant as the VCBC is a non-profit organization and charges very little about the cost of manufacturing. The people that are being named as responsible are elected by their members at the annual general meeting. They represent the interests of the 8500 medical patients and are unpaid for their work.

Club founder Ted Smith has been leading the organization and fighting for patient’s rights since day one. He started in the back of the van and the police have been bugging him ever since. According to section 38(12) of the Cannabis Licensing and Control Act, he has to pay an additional fine. “If a corporation is liable to a monetary penalty imposed under this section in respect of a contravention of this Act or the regulations or a failure to comply with a term and condition, an officer, director or agent of the corporation who authorizes, allows or acquiesces in the contravention or failure is also liable to the penalty.” 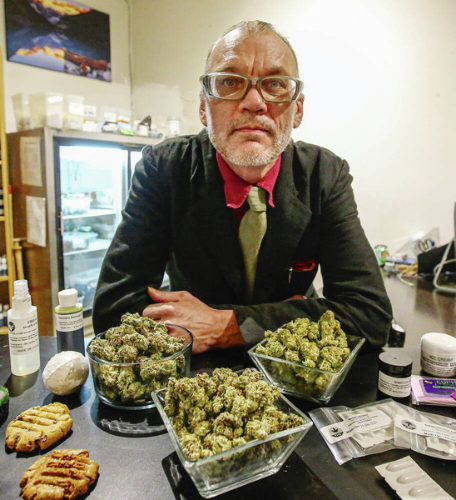 Sadly, the hits just keep on coming. As soon as they received the fines, the VCBC set to work on their legal defense. A Gofundme page was created to help raise $50,000 for legal fees and it instantly began to generate donations. Once they publically announced that they received the fines and planned to fight them, the VCBC had their website and Gofundme page shut down.

Legally, the province didn’t have to do this.

Many were hoping that the CSU would not follow through with any penalties and leave the club alone. After all, provincial jurisdiction extends to recreational cannabis but medically, it’s regulated by the federal government. On top of that, the Victoria Cannabis Buyers Club has submitted an application for a medical exemption, and its currently being processed by the Crown. This is a fact that the province is well aware of, as the Minister of Public Safety and Solicitor General, Mike Farnworth, included a letter in support of the exemption.

According to a letter that came with the fines, the CSU did not recognize the VCBC as a medical organization; this is because they are not licensed with Health Canada and have no doctors present. This heavy-handed approach would be understandable if the products sold were pharmaceuticals but the fact remains its cannabis; it’s a non-fatal plant that is far less dangerous than most of the products we use every day. There are medical patients that depend on cannabis because it’s the only thing that helps their condition. Its therapeutic benefit cannot be denied.

Why can’t the VCBC transition to the legal market?

When there are so many legal dispensaries around, why is this gray market operation still open? The simple answer is because they have to be. Many products that they make and sell can’t be found anywhere in the medical system, for example, high dose edibles and cannabis suppositories. This is critical for people with cancer and other acute conditions; these products allow them to ingest their medicine, circumnavigating any issues with digestion. People take cannabis suppositories to treat serious illnesses, no one is taking them to get high.

There are licensed medical cannabis clinics that provide some medical products however, their inventory is extremely limited. There are no licensed producers that supply high-dose THC edibles or cannabis suppositories. Why? Those products are not yet regulated by Health Canada. Without long-term human studies to back up regulations, Heath Canada leaves itself open to liability. No doctor would ever sign off on prescribing those products because it could mean a medical malpractice lawsuit; if it’s not included in the med school curriculum, legally they can’t talk about it. Long-term human studies on these products have yet to be concluded and until they do, its illegal to make and sell them.

Any organization that defies the regulation will lose its license to operate and this is why the VCBC cannot transition to the legal market. If they were to comply with the current regulations, they would have to cut off the supply of safe, life-saving medicine to some of the sickest people that they serve.

How to help VCBC

If you support the rights of medical patients and/or this situation does not seem right to you, please help. You have a voice and it is more powerful than you know. Here is how you can help.

Donations can be made by cheque to Jack Lloyd Law Corporation, etransfers to savethevcbc@gmail.com or drop off cash at 826 Johnson Street.

The Victoria cannabis buyers club is a strictly medical, non-profit compassion club that has been operating illegally for over twenty-six years. Every time that the organization has faced charges, they have valiantly fought them for the rights of their members, setting federal precedence in the supreme Court. The province could defend leaving them alone but instead, they are doing their best to shut them down. For the little compassion club that could, the fight for their member’s rights is far from over.

Type to search or hit ESC to close
See all results