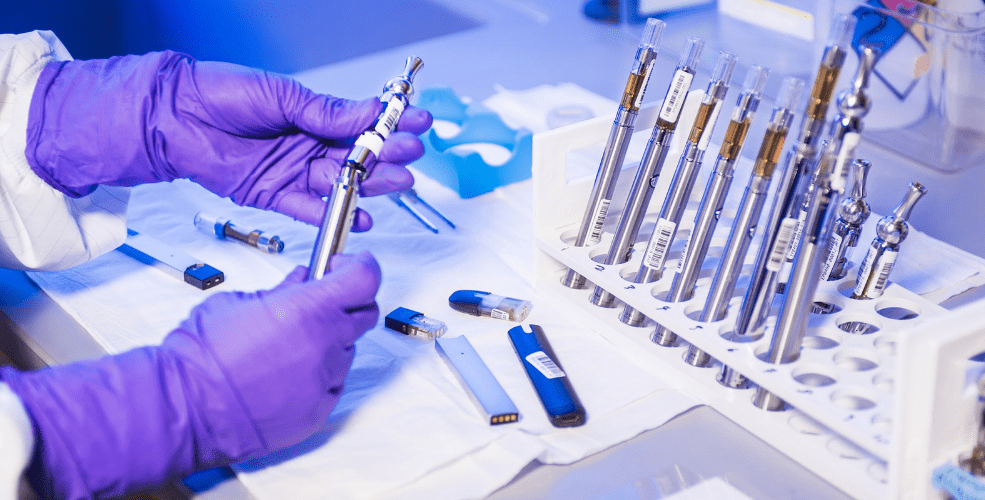 The act of vaping cannabis oil, as well as nicotine, appears to be far safer than smoking. But, a deadly illness suddenly appeared and disappeared just three years ago. The main culprit for the illness, known as Vaping Associated Pulmonary Injury (VAPI), has been cannabis and nicotine vape pens with an unorthodox ingredient, Vitamin E acetate But, we had to dig into the internet’s web of chat boards to find out who tried to use Vitamin E for any cannabis oil that may have ended up in vape pens. (1)

Some folks claim to have tried using green tea extract as an antioxidant for cannabis extracts (2), although CBD allegedly works as well. (3)

Oregon changed the rules for Vape Pens to ensure Lung Injury risk is minimized. They have restricted MCT and shark liver oil – yes actual shark livers – from legal THC and CBD vape pens in the state. (4) If the regulatory agency restricts a few associated ingredients, however, this may concentrate the use of another problematic substance we have yet to fully understand.

We previously reported that Canada’s cannabis producers can add small quantities of Vitamin E to legal vapes based on the laws established in Bill C45 combined with Chart II in The Tobacco and Vape Act. (5) The amounts that are allowed depend on ‘natural quantities’ of the flavour that is being replicated. In other words, there is no true limit to the number of vitamins a processor can add to cannabis extracts if they can provide a natural (concentrated) flavour with an equal amount of those vitamins.

What is a vaping injury?

Vitamin E acetate is famed for causing lung injury and even blamed for 68 deaths, the first of which occurred in August, 2019. (1) But, how did vitamin E acetate truly end up in the cannabis space?

This illness was identified sixteen years after the convenient devices, or at least the e-cigarette, first came to market. (1, 6) So, it appears that an event occurred to spark a dramatic number of vape pen deaths.

Let’s close the window down slightly, to three years rather than two decades. Cannabis was trending, a year away from being federally legal in Canada and other states. Extracts and other wares that had never been in demand before were now sought after – such as CBN isolates and Delta-8-THC. But, something else happened in the underground world of cannabis, less seen by the general publics’ eye.

An infamous blogger on cannabis forums known as Graywolf as well as his two colleagues gave control of the Skunkpharm blog to Pioneer Holdings, according to a post on THCFarmer in 2017. This change occurred adjacent to Graywolf’s absence from the cannabis space. Or at least, this man and his two colleagues were no longer policing one of the underground cannabis industry‘s most prolific chat boards.

The acquisition of Skunkpharm and Graywolf’s subsequent absence led many of Skunkpharm, but also THCFarmer chat board’s readers and contributors to move elsewhere. Similar to the outcome that restricting one surfactant has on the industry, Pioneer Holdings pushed the internet in an atypical direction by acquiring the Skunkpharm blog.

New kids on the block

For an analysis on how the cannabis chat boards are doing today, Marcus Richardson – commonly referred to by his alias, Bubbleman – was speaking with an invited panel on his Youtube Podcast, Hash Church. He asked if anyone visits the ‘chat boards.’ (7) The men and women on this panel have made enough impact in the cannabis space to cover several stories and possibly even two decades in the industry. So, apparently, few panellists partake in those forums at this point in their careers.

Skunkman Sam, the most elusive character on the panel, did speak up about his recent chat board experiences, though.

There’s a handful, or two handfuls of individuals that are capable of discussing it [cannabis] without sinking down to aluminum hats.

Between the first acquisition of Skunkpharm by Pioneer Holdings and the first vaping-related death was a change in US hemp regulations – The Farm Bill. Cannabis processors had to find a way around the new restrictions on THC after December 2018. With the Farm Bill, CBD became legal for production and sale – as long as no D9-THC was involved. This meant that processors started turning to the pharmaceutical industry’s catalogue of Intellectual Property and started to draft that knowledge into the cannabis industry. We discussed these nuances previously.

But, before this occurred the extreme refinement of extracts had begun to take on popularity amongst many extract artists. Use of saline but also magnesium silicate began to be used, which can be done with incredible care. Although, over time, if residual sodium from the saline or magnesium blends into the extract, it can turn pink. Otherwise, CBD is simply known to oxidize into a red variation (quinone) of itself known as CBD-HQ. (8)

The owner of one such site posted about an interesting attempt to prevent this discoloration once a simple PH shift failed – exactly one year and one month before the vape crisis began.

Did a cannabis forum site give the vape injury crisis legs?

Vitamin E Acetate is NOT an antioxidant for cannabis distillate. The use of this ingredient in inhalable cannabis products can be fatal!

The owner of one prolific chat board – a self-professed college dropout and jobless landowner – posted about his (unsuccessful) experiments with Vitamin E acetate as an antioxidant for Delta-8-THC extract. To some alarm, this comment was posted one year before the first vaping-related death. Since this post, the scientific community and the CDC (1) is convinced that Vitamin E acetate was partly responsible for the vaping-related illness that has killed 68 people. Was this post the precise moment that the cannabis industry went too far?

Did the consumer’s intrigue in new, milder, and more convenient effects combined with the processor’s interest in profits strip away a message that backed cannabis for decades? “It’s just a plant, man.” Or, can we blame the Farm Bill and THC’s federal prohibition and let the free market evolve?

Let us know who you think first Vitamin E oil to cannabis vape pens in the comments. And, check this story out to find out how vitamin E oil causes lung damage.