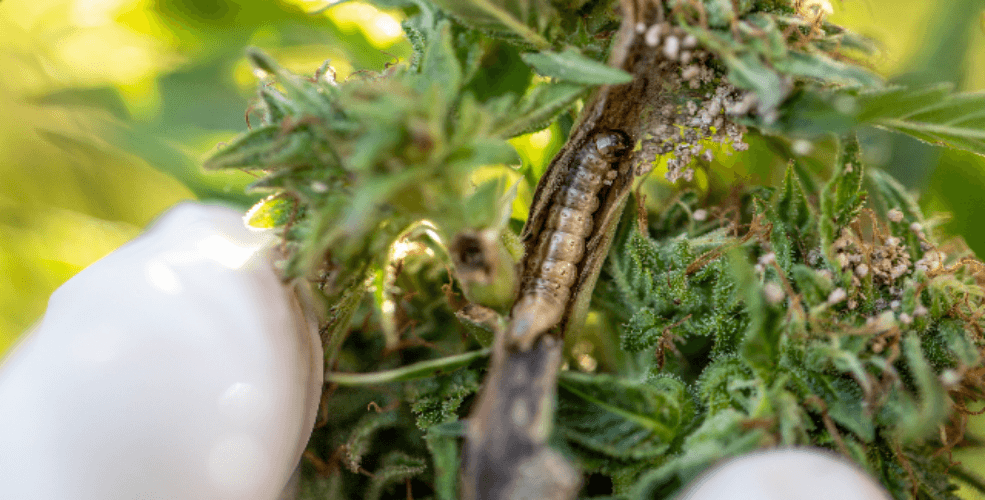 In a crop, certain insects can be introduced to nibble on excess mould instead of pesticides. Not only are these potentially harmful to plants, but they will also only mildly suppress instead of outright preventing fungal invasions. Mould eating insects are also less versatile and create their own problems whereas parasitic myco-solutions can be sprayed to destroy a variety of targetted pests instead, but are always uncertain when it comes to using them on cannabis.

Not all moulds prevent the growth of other, uninvited cultures. There are beneficial fungi who can parasitize and kill hungry invertebrate, not other moulds.

Beauveria Bassiana is a ‘mycoinsecticide’ available from two companies, in three variations:

These sprays are 20% active culture. The other 80% is undisclosed, but not all are trade secrets.

Bio-Ceres’s inert ingredients according to a patent assigned to Anatis Biological:

Kaolin Clay (carrier), cornstarch or calcium carbonate (dispersant,) citric acid (disintegration agent, ) and xanthan gum or cellulose (binder.) As well as polysorbate 80 or polyethylene glycol, if they choose to use a surfactant.

How do these sprays kill insects?

An insect’s own appetite is used against them. If a hungry critter were to bite into a strain of Beauveria Bassiana, the fungus latches onto the inside of their abdomen. Afterwards, it forcibly penetrates the exoskeleton from the inside out. Beuveria kills the insect with it’s bare, parasitic mycelium.

What about residuals and recalls?

It is not false to speculate this white mould was found during a certain recall, instead of Prestop. Redecan admitted to using “tiny mites” to kill spider mites, though. The process of combining a mycoinsecticide with the beneficials they did leave crawling on their flowers is not impossible, although it is fairly unnecessary.

Legally speaking, the word ‘pesticide’ is exempt from ‘control products‘ used to prevent mildew or odours. If cannabis were a food product, insecticides like Botaniguard would be restricted from ‘pesticide-free’ products. Fungicides like Prestop, however, would not fall under that guarantee.

The truth is, those questions can be asked, but we will never have all of the answers. Cannabis is a ‘herbal medicine,’ even when it is sold as a non-medical product.

What if I smoke Bontiguard?

Nitrogen dioxide was given low safety limits of 1 ppm because it’s a gas that is known to cause mutations.

Inhaling a considerable quantity of Botaniguard, without ignition, can cause asthma-like symptoms. Spores travelling into your lungs could cause a small amount of damage. Beuveria Bassiana carries unknown effects when vaporized while Botaniguard’s inert ingredients are likely carcinogenic when lit on fire. Like most fungi, it can also cause allergic reactions.

Is our government poisoning us?

Additives that are used to help kill unwanted pests may be dangerous to smoke and inhale. Despite this fact, permitted insects are allowed to be sold in jars of flower by the gram. So, why is this mould added into a potential medicine someone will be smoking?

To avoid crop damage, and make it possible to grow warehouses of cannabis for the nation, of course!

That is why the best place to acquire cannabis is from small crops where a grower’s heart can stretch as far as needed. This is where crops can actually thrive, without the use of foliar pesticide applications on budding cannabis.