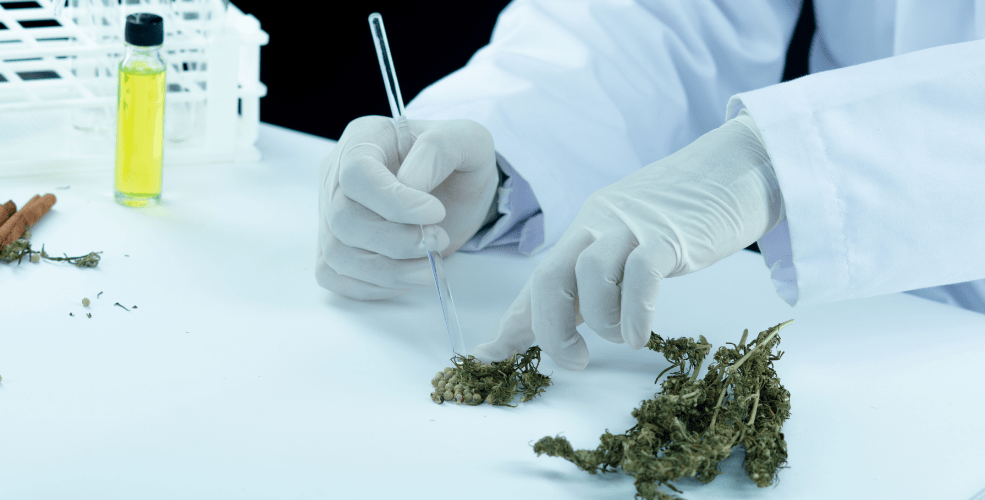 CBDH, a new cannabinoid for pain, has been found in cannabis

We reported on the much-discussed scientific discovery of a THC analog thirty times more efficacious than the infamous D9-THC. An earlier study found THCP, as well as CBDP, which are larger forms of THC and CBD, respectively. Now, the same team of researchers from Italy bridged a gap between regular CBD and CBDP. They found a unique form of THC as well as CBDH, a new cannabinoid for pain.

The size of the cannabinoid depends, mostly, on the number of carbon atoms. Regular THC and CBD have side chains that consist of five carbon atoms, and the ‘phorol‘ cannabinoids contain seven. Whereas, CBDH (cannabidihexol) is a hexyl cannabinoid with a six-carbon sidechain. (1)

Adding to the discovery, the team also found THCH (Δ9– tetrahydrocannabihexol). However, the quantity they collected was insufficient for further tests. It is still unknown if THCH is an intoxicant; potent like THC or even THCP. In any case, the new variants came as no surprise considering a cannabinoid that resembles THCH was synthesized in 1949. This artificial substance, known as parahexyl, is psychoactive and similar in structure to THCH. So, the researchers decided to check. They had to make sure they were looking at new natural analogs of THC and CBD, not some previously known methylated groups.

The Regional European Development Fund financed the research project in Florence, Italy. The team studied a strain known as CIN-RO, which was bred by the Council for Agricultural Research and Economics (CREA) in Rovigo, Italy. And like all cannabis approved for research in the boot-shaped nation, the Italian Military cultivated and provided the cannabis.

When the team isolated CBDH, on the other hand, they collected enough to study its effects on mice. Interest that the researchers took in CBDH in this study contrasted the team’s research on phorol cannabinoids (THCP) one year prior. The earlier scientific discovery disregarded CBDP for its lack of cannabinoid receptor activity. But, regular CBD, with a five-carbon chain, lacks true activity at the cannabinoid receptor and instead has an allosteric relationship that took decades for man to truly appreciate. Now, the market is flooded and stocks have gone to mushrooms.

Origins of an analgesic cannabinoid

Thankfully, without enough THCH on hand, the researchers took interest in CBDH and the new cannabinoid’s effect on pain. CBDH produced strong antinociceptive (painkilling) properties in mice at an (intraperitoneal) dose of one and two milligrams per kilogram. Interestingly, that effect was void at a higher dose of five milligrams per kilogram. The low dose is on par with regular CBD, but CBDH has atypical effects at larger doses which suggests a biphasic effect.

The team hypothesized the presence of CBGH as a logical origin of other hexyl-cannabinoids. This is because CBG is the origin of both, THC and CBD, much like CBGV which becomes CDBV or THCV. After much analysis, however, they did not find CBGH or any related cannabinoid. In the end, they could not determine how the hexyl cannabinoids, THCH and CBDH, formed in the plant. Clearly, science requires more research to truly understand new variants of THC and CBD found in these analytical success stories.

If certain strains depend on CBDV for the treatment of epilepsy (focal seizures), how pivotal is CBDH for pain relief? (2)

Let us know if you think CBDH is a new discovery that will help certain cannabinoid formulations relieve pain in the comments. Or, will CBDH become tomorrow’s wash of marketing gimmicks?