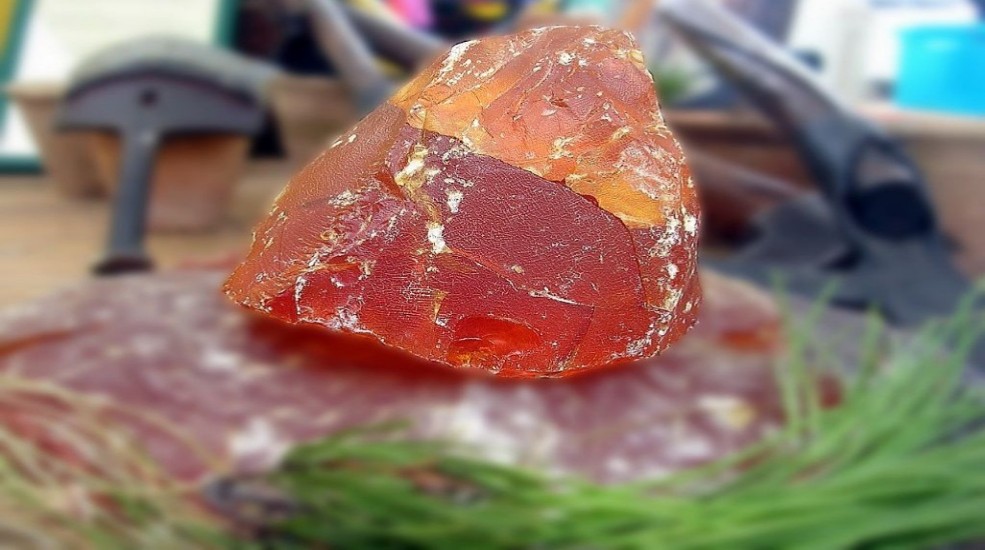 Cannabis concentrates have been given a shady title as of recently. News is going around this sappy amber-glass substance is not all it seems. Many have found a product that breaks up and looks an awful lot like the sap of a tree that is known as colophony gum, or more simply, pine resin. CLN investigated in an attempt to analyze the true identity of fake shatter.

Craig Ex of Expert Joints, in collaboration with CLN, did research into the issue, sacrificing good heads, THCa, and high-grade beautiful extracts by soaking them in isopropanol alcohol to make sure they do dissolve completely; one brand didn’t. He received a suspect brand by the name of Pennybags which left behind a gelatinous substance that did not dissolve for days. We still do not know what it is but unlike cannabis, it is not alcohol soluble. This is not wax, lipids, or even pine resin, as those will all dissolve in alcohol. This means pine resin could be added to shatter, but it is not the coagulant that has-been left undissolved in iso.

Another theory floated for a short while consisted of an incorrect extraction procedure, specifically, colour remediation technique (CRC.) This is an extract that is further filtered through a proprietary mixture of mediums, like silica and (T5) bentonite clay. This should only be done with highly engineered equipment by a proper technician, which is what this theory evolved around. Is someone filtering extracts through silica without a clue of what they are doing?

Silica does turn into a gel in water, and it won’t dissolve in alcohol, but the properties of the adulterant discovered by Expert Joints do not entirely fit. The more common filter medium, bentonite clay is even farther from the characteristics of fake shatter, yet silica itself still requires further investigations to be excluded from a list of possibilities. Whatever the impurity is, it has clearly been added to the extract intentionally based on the quantities we have seen.

There is a risk that CRC extracts are filtered incorrectly, but that is clearly not the concern here. As for pine resin, it could easily be in lots of slabs of shatter, yet something else is still there otherwise the concentrate would have completely dissolved in alcohol. We will be discovering if fake shatter is water-soluble in due time, but for now, we can pinpoint a few substances that become a gelatinous missile in ethanol. Many structures in nature fit within this solubility bill. One that is strikingly similar is the gum of another tree. Instead of pine and resin, the suspecting tree and gum could be that of acacia.

Gum arabic is used as an emulsifier in many products, including candy. It could be added to shatter, but that is nothing more than a calculated theory. It does, after all, share many aesthetic similarities with pine resin, with the right physical properties as a bonus. Unfortunately, though, we have far more tests to conduct on a variety of substances, like cactus juice or carnauba wax, to know for sure. There may even be a way to transform vegetable glycerin into a thin-film resin with proprietary binding agents already in pesticides and they will be finding their way into the cannabis industry in the form of oral strips. There are binding agents that dissolve into other resins. Our purpose is to stay one step ahead of scammers and be able to consistently quantify their shortcuts in order to eliminate them. We will release more information when we know more ourselves.

In the meantime, extracts can be soaked in alcohol to see if impurities remain undissolved, but this still does not show if there is pine resin or other alcohol soluble adulterants. Pine resin will dissolve into the alcohol just as thoroughly as the cannabis extract itself.

Lab testing will miss the substances found, even if we knew what they are. We are working to have a sample of fake shatter quantified and perhaps a standardized test to check for a common pine resin compound, like abietic acid, could be established in time. Pine resin was being sold as fake hash in Israel around 2015 which was discovered through lab testing. As for now, there is no certainty without knowing and trusting the producer personally.