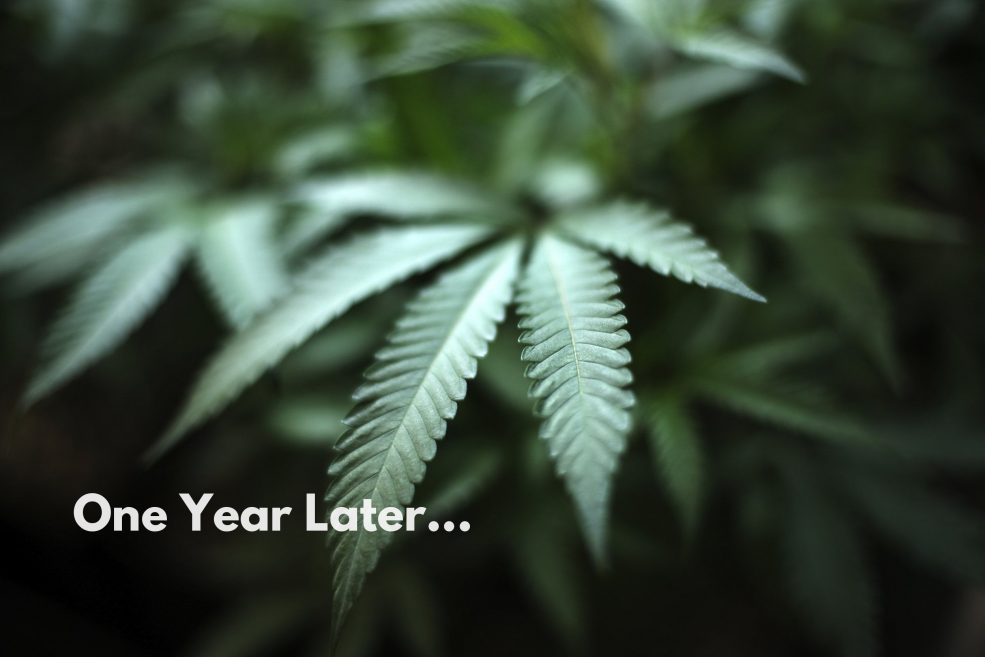 Cannabis Legalization, One Year Later – The Good, The Bad & The Unknown

The Good about Cannabis Legalization:

Despite unrelenting criticism, the bottom line is that we have successfully lifted the federal prohibition on cannabis in this country. The legalization of weed ended a nearly ninety-year prohibition against the plant.

Our approach to legalization also differed from other countries, taking the more radical approach of opting to federally legalize the drug, rather than allowing individual provinces to decide for themselves.

This, in itself, is a major step forward, as it squarely seeks to place cannabis and cannabis-related laws under federal jurisdiction. This means that, where provinces or municipalities attempt to meddle with cannabis laws, restricting access or prohibiting the plant altogether, their attempts are likely to be thwarted.

Consider Quebec as an example:

Following legalization, the province passed laws prohibiting home cultivation. While our federal laws allow individuals to grow a maximum of four marijuana plants at home – albeit subject to some restrictions – Quebec’s provincial laws attempted to ban this activity altogether. Residents of the province were not permitted to grow marijuana at home under any circumstance.

Ultimately, however, the court ruled that the provincial law against home cultivation infringed on the federal government’s exclusive jurisdiction. It was declared unconstitutional, which means that residents of Quebec are now permitted to grow a maximum of four cannabis plants at home…just like the rest of Canada.

Although our system isn’t perfect, the fact that we have legal access at a federal level gives the Canadian cannabis room to grow.

Stereotypes and stigma around cannabis use have run amuck for centuries.

The fear of a criminal charge, prosecution and even jail time created a world of fear, scare tactics and misinformation. The Reagan-era ‘war on drugs’ anti-pot propaganda did cannabis users no favors either.

With the legalization of cannabis in Canada, though, some of the stigmas around cannabis and cannabis consumers have started to drift away.

Legalization has allowed people to freely talk about their cannabis use – and curiosities – without fear of criminalization.

Cannabis consumers are free to come out of the so-called cannabis closet, while parents and educators are able to provide more factually-based cannabis education to curious young people. Educational panels, workshops, and events related to the plant are popping up all over the country. Even the government has dedicated more dollars to advancing cannabis research, while private investors are also clamoring to jump on the bandwagon.

There is suddenly an open and public space to share cannabis information and experiences.

It seems like everyone is talking cannabis – and when it comes to de-stigmatization, open and honest conversations are the first step towards blazing a new trail in the right direction.

The Bad about Cannabis Legalisation:

1) Too Much Red Tape

Anytime the government gets a hand in matters, concerns over beadledom and red tape usually become an unfortunate reality. After all, governments have a way of over-complicating matters…and cannabis has been no exception.

The interaction between federal, provincial and municipal cannabis laws has been puzzling at best and impossible to decipher at worst.

For example, simply finding a place to lawfully consume marijuana can be a challenge, depending on where you reside. While the drug is no longer illegal, there are layers of confusing laws and by-laws which restrict where a person can spark up. Invariably, these will range from province to province and city to city. So, figuring out where to consume is just one of the many challenges faced by Canadian cannabis users.

All in all, Canada’s current version of cannabis legalization feels overcomplicated and overpackaged.

And perhaps the most literal overpacking of our legal product comes in the form of the packages themselves. Excessive and unnecessary plastic packaging has become yet another unwelcome hallmark of legalization, ticking off both cannabis consumers and environmentalists alike.

Doing away with the red tape – and simplifying cannabis laws – may be the only way to truly free the green.

Some critics have described Canada’s version of cannabis legalization “Prohibition 2.0.” They argue that cannabis has been overly legislated and that the rules and regulations around it have done nothing more than creating a new and different version of cannabis criminalization.

When you consider the fact that cannabis arrests are still happening in this country, the criticism appears to be more reality than a pipe dream.

After all, when the Cannabis Act legalized cannabis, it simultaneously created over forty new marijuana-related offenses. Some of these offenses are serious in nature and attract significant penalties, including a criminal record and even jail time.

For example, possessing more than the allowable limit of cannabis products can land you in jail for up to five years, while illegally distributing or selling cannabis can put you behind bars for fourteen.

And to add insult to injury, it appears that these laws are still being enforced in a manner that is disturbingly discriminatory and inherently racist.

First Nations peoples, like Rodney Clayton Felix, have been some of the first to feel the brunt of this new system of cannabis criminalization. Felix was ordered to serve three months in jail after being found with more than 30 grams of marijuana in his possession just one month after legalization. This example – and others like it – are troubling given the historically disproportionate conviction rates of visible minorities for drug offenses in this country.

But the government’s official position on all of this seems a tad disjointed, considering the fact that they recently unveiled a fancy new streamlined pardon system for historical cannabis convictions. Pardoning historical offenders while continuing to prosecute non-violent present-day cannabis users is disharmonized and existentially unsound.

At the end of the day, the continued criminalization of cannabis has to be the biggest strain on our so-called legal scheme.

1) The Future of Edibles – Court Challenges & Beyond

Okay, at this point, there is too much unknown, to sum up in one single, soundbite. Even one year out, the questions around legal weed are still hanging heavy over the whole of Canada.

But one thing that has been hazy, which we can expect some clarity on in the coming months, has to do with the long-awaited legalization of edibles, extracts, and topicals. Although the government has been dragging its heels on this issue for some time now, Health Canada will be implementing regulations, which are set to come into effect on October 17, 2019.

But don’t get too excited yet; legal products will not actually be available for purchase until sometime in mid-December.

And what’s more – many have predicted that high demand for edibles, topicals and extracts may contribute to the already on-going cannabis supply shortages as production is diversified and split.

On top of it all, a mountain of legal challenges will be launched. Prominent cannabis lawyers, educators, and activists have already spoken out about a number of problematic aspects of the regulations, which they expect to be brought to the attention of the courts in relatively short order. Low dosage restrictions, overly-restrictive product rules, and nearly impossible advertising standards may all provide fodder for legal arguments well into the future.

This means that, even on the threshold of legalization, the ultimate fate of legal edibles, extracts, and topicals may remain cloudy in Canada for some time.