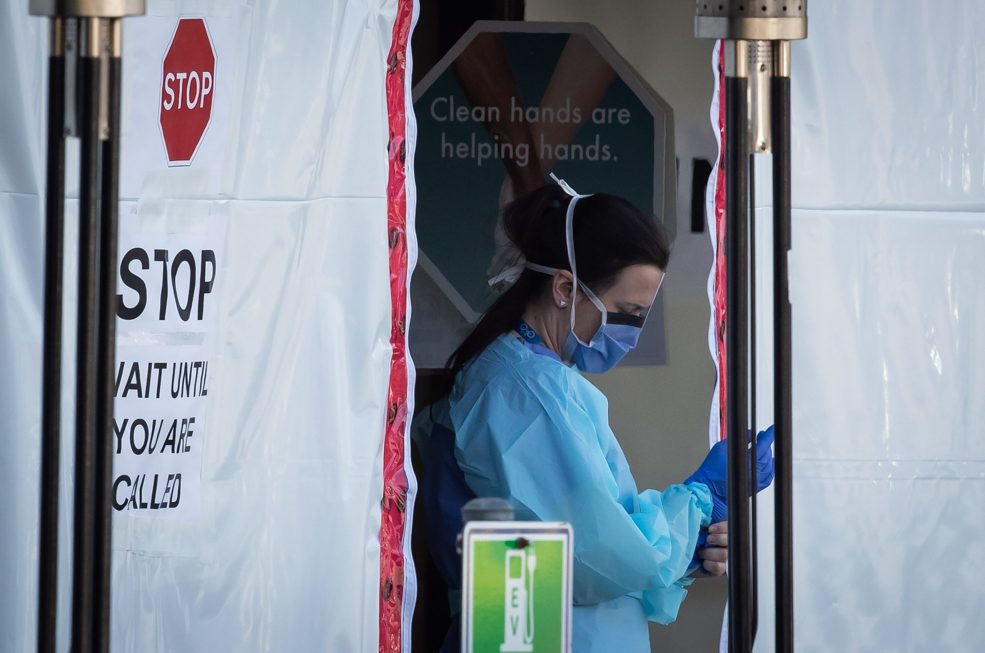 The latest news on the COVID-19 global pandemic (all times Eastern):

Saskatchewan Premier Scott Moe is announcing stricter restrictions to prevent the spread of COVID-19 and money for those in self-isolation.

The government says it will give residents forced to self-isolate who aren’t covered by federal employment insurance programs $450 per week for a maximum of two weeks.

Moe says this program mostly applies to self-employed residents and will cost $10 million.

He also announced the ban on large gatherings will drop to no more than 25 people in one room except where two-metre social distancing can be maintained, and that bars and restaurants will be closing.

The government is also making it mandatory that people returning to Saskatchewan from foreign travel must self-isolate for 14 days and Moe says if they don’t they could be arrested or face fines.

The province has eight confirmed and 18 presumptive cases.

All restaurants in Vancouver must be closed for dine-in service as of midnight.

Mayor Kennedy Stewart says the order will be enforced for restaurants that do not comply, starting with a notice that could escalate to prosecution if there is continued non-compliance.

Malcolm Bromley, general manager of Vancouver‘s park board, said the department has also decided to close its playgrounds across the city.

The provincial government ordered bars and nightclubs to close earlier this week.

Sandra Singh, manager of arts, culture and community services for the city, said there is now a plan in place for the potential use of Vancouver’s community centres as shelters for homeless people.

Alberta Premier Jason Kenney says the province will provide extra funding and staff to set up overflow homeless shelters and spots for those who have nowhere to go but need to self-isolate.

Kenney says the Expo convention centre in north Edmonton will be used as an overflow homeless location.

The province has already promised $60 million for charitable and non-profit groups to support seniors and other vulnerable populations hit hard by COVID-19.

Toronto says it’s investigating cases of COVID-19 in patients who include a paramedic, a resident of a long-term care home and people experiencing homelessness.

She says Canada’s most populous city has confirmed 161 cases of the disease.

De Villa says 10 of those patients are in hospital.

Quebec has seen the number of confirmed COVID-19 cases rise today to 139, up from 121 cases on Thursday.

Premier Francois Legault says the situation is still under control, and the province has put off elective surgeries and freed up 4,000 beds and is able to administer 6,000 tests per day.

Legault says it’s unlikely that school will resume this month and it’s possible it will be May before students are back in class.

Public Safety Minister Bill Blair says asylum seekers who attempt to enter Canada at irregular border crossings like the one at Roxham Road will be turned back — but not detained.

Blair says there will be no detention by Canadian or U.S. authorities for those returned to either country, except in rare cases involving serious criminality.

Deputy Prime Minister Chrystia Freeland is asking Canadians for patience as the Liberal government hammers out the details of the major moves they are making to respond to the global pandemic of COVID-19.

She says officials are doing things that would normally take several months in a matter of days and that they are aiming for speed, rather than perfection.

She says that sometimes means making an announcement about the actions they are taking and then filling in the details after the fact.

Freeland says that is not how they would normally operate, but she hopes Canadians understand the extraordinary situation.

The consistent message from Canada’s top doctor is that Canadians need to avoid all non-essential travel.

And Dr. Theresa Tam repeated that message, without elaboration, when asked whether Canadian athletes should travel to Japan for the Tokyo Olympics, which are set to open July 24.

Health Minister Patty Hajdu adds that with disruption in air travel and border restrictions around the world, the safest thing for Canadians to do right now is stay home.

Newfoundland and Labrador has announced the province’s fourth case of COVID-19.

Chief medical officer of health Dr. Janice Fitzgerald says the man in the Eastern Health region, the most populated health authority which includes the capital city of St. John’s, had recently returned from travel.

The province has three confirmed cases and one presumptive case of the disease.

Fitzgerald says 300 people are in isolation and being followed by public health.

Prince Edward Island is reporting no new cases of COVID-19.

The province has two previously confirmed cases who are at home and are reported to be doing well.

The federal government has been able to secure more than 11 million N95 respirator masks and delivery will begin immediately.

Public Services and Procurement Minister Anita Anand says her department has been working closely with the federal public health agency to figure out which medical supplies are needed and where.

She says her department recently asked manufacturers across the country to let Ottawa know what they would be able to provide and more than 5,800 companies responded by offering various goods or services to combat COVID-19.

She says the goal is to be “over prepared,” especially since global demand will continue to climb and border restrictions could affect the supply chain.

Industry Minister Navdeep Bains is asking Canadian business to step up and tell the government what they can do to help fight COVID-19.

He says some businesses, like distilleries, have already made quick changes to start producing high-alcohol hand sanitizers.

More money is being sent to researchers, and to small companies that might have innovative products that could help with the pandemic but aren’t ready right now, such as diagnostic tools.

Bains says the full weight of the federal government is behind the plan.

The Saskatchewan government is converting child-care spaces in schools into daycares for children of health-care workers responding to COVID-19.

It says priority will be given to school-age children of staff in hospitals, long-term care facilities, labs and those working at COVID-19 testing and assessment sites.

The sites are to be open Monday.

Federal ministers are trying to reassure Canadian children that the government is doing all it can to keep them safe.

Deputy Prime Minister Chrystia Freeland says that as a mother, she knows these are tense times for young people.

She says an extended break from school might not be turning out to be as much fun as kids expected.

Public Safety Minister Bill Blair says Canadians and Americans have drastically reduced their non-essential border crossings even before a closure of the Canada-U.S. frontier takes effect.

Blair adds that anyone crossing the Canadian border away from an official crossing point, including people crossing to claim asylum, will be redirected to the United States, with “necessary and limited exceptions.”

The restriction will only be in place for 30 days, but it’s subject to renewal if it’s still needed in a month.

Blair says people who have recently entered Canada to make refugee claims will be allowed to do so but will be kept in isolation for 14 days.

Manitoba has declared a state of emergency due to COVID-19.

Premier Brian Pallister says it was not an easy decision but it was necessary to protect the health and safety of all Manitobans.

The measures will limit public gatherings of more than 50 people, including at places of worship, restaurants and bars.

As of Thursday, there were 17 cases of the virus in the province.

Walmart Canada says it will hire 10,000 more employees to work in its stores and distribution centres as it deals with issues related to COVID-19.

The company announced the jobs in a letter sent to customers by Walmart Canada CEO Horacio Barbeito, but did not provide details on where the jobs would be or whether they would be temporary.

The letter says Walmart is also accelerating its annual bonus payments given to its store associates and is doling out live online physician care to its more than 90,000 employees.

Walmart also says it’s experiencing high demand for pickup and delivery and has decided to now allow home grocery deliveries to be left at a customer’s door to minimize contact.

The government is working with manufacturers to retool and produce equipment needed to treat people for COVID-19.

Prime Minister Justin Trudeau says a new agreement with the United States will see irregular migrants turned away at the border.

As recently as yesterday, the government said the solution to screening refugee claimants was to assess their health when they were intercepted and then hold them in isolation for the standard 14 days.

Ontario is reporting 50 new COVID-19 cases today, bringing the total in the province to 308.

That is the largest single-day increase in new cases.

No information is listed for about half of the new cases, but two people are listed as being hospitalized and four are in a long-term care home in the Durham Region.

Provincial cannabis distributors across the country are making changes to protect consumers and employees and to help deal with a spike in demand during COVID-19 pandemic.

The Ontario Cannabis Store says it has suspended same-day and next-day deliveries because of a “higher-than-normal” volume of orders.

The OCS, the Quebec pot distributor Societe quebecoise du cannabis and B.C. Cannabis Stores also warn that Canada Post is no longer delivering parcels that require a signature or proof-of-age to customer doors.

Urgency related to the COVID-19 pandemic prompted politicians in Yukon to work into the night to pass the territory’s latest budget.

After voting unanimously to bring the Liberal government’s 1.6-billion dollar budget forward for early consideration, it was debated and passed shortly before 11 p.m.

The legislature, which resumed March 5, has now been adjourned until October 1.

Premier Sandy Silver says passage of the budget means Yukon can focus all resources on fighting COVID-19 and provide spending assurances for the medical community, health, social services and the economy.

They say they will conduct the meetings through webcasting or teleconferences instead of in-person gatherings.

The Canadian banks and insurance companies say they have obtained a court order that will allow them to make the change in lieu of in-person annual meetings.

The move novel coronavirus has caused several of these companies to close brick-and-mortar locations and ask their employees to work from home.

A Canadian has died in Japan from complications related to COVID-19.

Foreign Affairs Minister Francois-Philippe Champagne confirmed the news on Twitter and shared his condolences with the family of the as yet unnamed Canadian.

The federal government is providing consular assistance to the deceased’s family.

Sobeys grocery stores are taking further steps to prevent the spread of COVID-19 among customers and staff.

The company began installing Plexiglas shields for cashiers in select stores last night and plan to have them in every store as quickly as possible.

Sobeys is also mandating that employees wash their hands every 15 minutes and will reduce store hours to allow more time for sanitizing.

Champagne had flu-like symptoms after travelling abroad and took the test yesterday as a precautionary measure.

Tory said the move is meant to alleviate stress on people and business owners during the economic difficulties of the COVID-19 outbreak.

A union official says Air Canada is laying off more than 5,000 flight attendants as the country’s largest airline cuts routes and parks planes due to COVID-19.

Wesley Lesosky, who heads the Air Canada component of CUPE’s airline division, says the carrier is laying off about 3,600 mainline employees as well as all of Air Canada Rouge’s 1,549 flight attendants.

The layoffs, which Lesosky says will take effect by April, affect roughly 60 per cent of flight attendants at the two segments.

Air Canada says the layoffs are temporary and employees will be returned to active duty status when the airline is able to ramp up its network schedule.