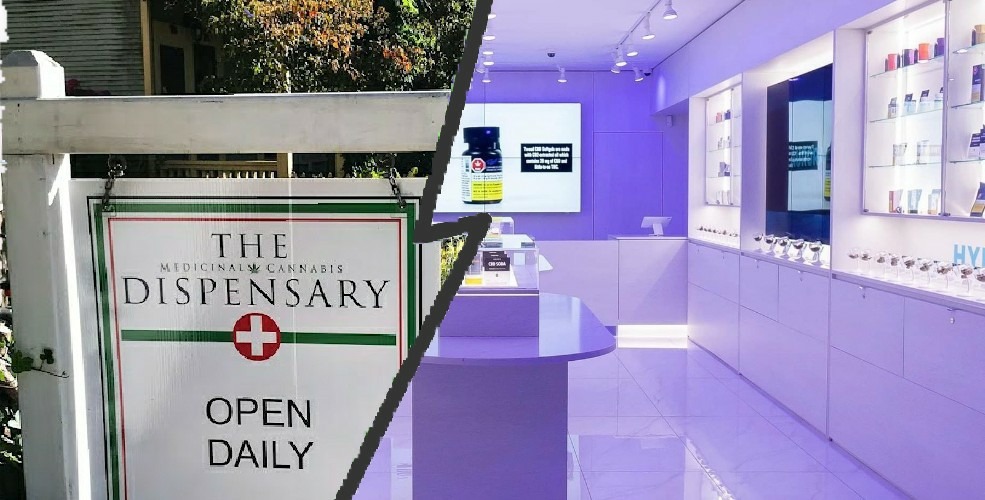 From legacy to legal, the cannabis market belongs to who?

Three years ago, Canada legalized cannabis, but the market did not come with products familiar to most Canadian customers. Beloved small growers and their brands could not make Health Canada‘s initial cut, including a shortlist of former licensed producers. A shift from legacy to legal industry occurred, but license holders don’t own the industry because the cannabis market belongs to consumers.

Legacy cannabis — the black market — was slowly shut down after legalization. After establishing regulations, the shift restricted most product and brand promotion, limiting consumer connection and knowledge. Producers also struggled to maintain quality for a reasonable price.

And so, customers became harder to satisfy in part because of regulations. Beyond quality, however, industry experts think the legal market completely lacks brands and high-quality products to attract customer appeal.

A brand house rolls up a piece of Big Cannabis

Old-school home growers, on the greener thumb, have spent years sussing quality. Whereas, for three years, Canada’s legal cannabis industry has struggled to overcome a plague of bad bud. Product is put on shelves dead after irradiation and typically left to dry out in monotone clunky cardboard-cocooned containers. During a phone call, Trang Trinh, the founder of TREC Brands, agreed that the legacy market is an asset while also urging that customers are key.

Raid after raid, brands fell from the free market

However, many Canadians were left deserted after decade-old traditional, legacy market brands were wiped out three years ago, raid after raid. Industry experts agree that companies spent millions of dollars on infrastructure that simply functioned as a sponge for investors. Therefore, it’s evident that the legacy market’s role continues to be suppressed rather than adequately replaced by Big Cannabis.

Labels in Canada’s market remain sorely short of colour and information, speckled instead with overstated warnings. These shortfalls disengage consumers from the legal market, encouraging them to fall back on legacy, tradition and the brands and small businesses consumers used to love.

TREC is acquiring Agripharm with hopes of growing in the Canadian market. Over the last three months, they captured a 1 percent hold on the dry flower market in BC, Alberta, and Ontario, doubled from six months prior. They plan to integrate vertically, backwards into the Canadian market to more than double a revenue currently on pace for $10.5M in 2021. But does their success rely on the cannabis market, which truly belongs to the consumers?

Consider that legacy market producers are known to establish an independent network and dip. Additionally, that Agripharm is one-third owned by Canopy Growth. And small growers have launched off of and away from Canopy in the past.

Is the legacy market a foundation for Big Cannabis?

El Hasho, known formally as Mike Imposimato, is a legacy market hash producer (hashishin). El Hasho is a well-recognized figure in the hash and solventless cannabis extracts industry. Co-founded by El Hasho, alongside John Fowler and Scott Walters, BIG (Blaise Independent Growers) processes cannabis under an agreement with Agripharm, a licensed cannabis producer. This is one example where legacy growers and processors act as a key in a market sorely lacking experience. As such, Trang agreed that Imposimato — alongside other extract artists — accounted for a piece of their decision.

That is one component that inspired the transaction [with Agripharm], but the deal also checks a lot of other boxes for us.

Three current owners comprise the licensed producer her company plans to acquire in the coming months. And still, details regarding management and ownership have yet to be completely sussed in the transaction. Regardless, Canopy Growth Corporation, Organa Brands, and Green House Genetics collectively own Agripharm and have become shareholders of TREC (Trust, Respect, Ethics, and Compassion) with a 35 percent claim. But will vertical integrations promote strength in the partnership, or will acquisitions encourage experts from the legacy market to move into their own business?

TREC will actually commercialize the products, meaning that we will facilitate the listings with the boards and sell to retail partners, and also from a marketing perspective, get consumers to pull.

To satisfy customers, they hope to rely on brand development and their new partners to produce quality products. A new report by Deloitte, HiFyre, and BDSA suggests 86% of consumers are willing to pay a premium for better products and that craft cannabis climbed 158% since 2020. Due to regulations, though, high-quality cannabis takes considerable effort to produce. Furthermore, brands do not yet play a role in the market according to Deloitte’s report.

Another recent study proved that consumers unknowingly make decisions based on terpene profiles. So, quality is quintessential, and the secret behind repeat customers is finding a perfect ratio between THC ratio, aromatics, and effects. Terpenes, however, face many unfortunate restrictions before they can reach a consumer’s palate. Improved product management and distribution can solve the issue of year-old, oxidized cannabis, except in provinces that host their liquor board as a centralized middle-man.

In early October, a cannabis retailer in Pemberton, BC, noted extracts produced under Agripharm brands — alongside several other products — were sold out on the BC Cannabis Stores Wholesale Website, the solitary access point for BC stores. To be fair, though, Agripharm is located in Creemore, Ontario.

Buying power, a cannabis market big or small belongs to the consumers

In any case, consumers might see more legacy market producers at least enter the legal market if access was more convenient for consumers. In the event they do, a brand house might have a chance at success relative to Canopy’s independent track record of dumping dollars. But will customers make the same transition, or will their traditions and sales be dedicated to the legacy of the free market?

Another legacy market network is currently drafting into Canada’s legal industry that carried several unlicensed brands in the shadows throughout the gantlet of legalization. Those familiar with El Hasho might recognize the brand house, Ghost Drops.

At the end of the day, albeit grand with opportunities, stock options are not traditional or viable in a cannabis market that belongs to consumers and patients. Any brand house’s success will rely on the craftsmanship of farmers, hashinins, and extract artists. So is any brand house or distributor in the right laneway to preserve and express those terpenes despite a haze of regulation and law, or will a farm-gate cannabis model better fit the market?

Let us know in the comments if you think legacy producers should draft into legal operations or keep hashing it out on the free market. And stay tuned to learn how the shift the cannabis industry took during the pandemic paled in comparison to the legacy market shutdown.