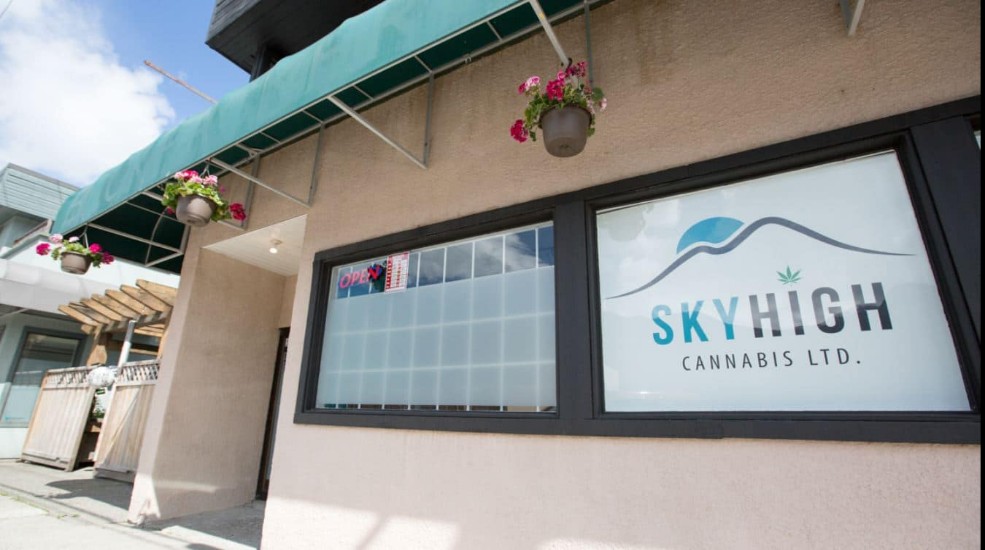 Sky High Cannabis Store closed their doors for a month to prepare for legalization, and on September 30, 2019 they became the first retailer in Squamish, British Columbia, to receive a provincial license.

The municipality had kept it’s cannabis retail regulations in a row for quite some time. In fact, once legalization came into effect last year, “our municipality was the first to have all of the bylaws in place,” Aimee Todd-Musset, co-owner of Sky High Cannabis, told CLN.

The store began as a dispensary with their base family, “myself, my brother [Matt,] my Mom and Dad [Tristan.] And now we have grown into our extended family. We think of all of our employees as a growing family.” Aimee’s daughter and General Manager, Linley Musset explained.

Now their product is neatly packaged in excessive plastic. They have a “Herb Garden.” A shelf of buds in smell-jars sealed by a band of regulation approved tape. Small perforations are revealed after you remove a little silicone flap, which a faint aroma wafts from.

According to Aimee, “that is quite different than before where we could open a jar and you could see it, put in a bag and smell it, “

We talked to Sky High about a recycling program to deal with the plastic, but more importantly, how municipal support has been the key to their success.

Cannabis Life Network: You have your own recycling program that allows people to return their empties and a petition alongside it. Can you describe that program?

Aimee Todd-Musset: “Canopy Growth started it because they realized it was their packaging that needs to change. When he described it to us, he said there is going to be a cost involved for them. That means to me, okay if there is pain there is change.

That is where the change has to actually come from – the LPs.

We feel a bigger impact will be made if everyone brings in their recycling as well because the more brought back to Tweed, the more the government will actually see. When people recycle at home, they don’t see the impact.

Community versus province in relation to cannabis stores

Squamish’s municipality has been incredibly supportive of Sky High even operating formally as a dispensary.

“That was their mandate. They want to have all the cannabis stores licensed.

Despite all that municipal support for the cannabis stores, were you still at risk of raids?

“No, the Solicitor General’s security unit stopped in one time. I believe they made an appearance to every single cannabis store in Squamish. On June 18, Bryan Raiser from 99 North [another dispensary in the neighborhood] went to council right around the time they visited everyone. He asked the mayor to send a letter to the solicitor general that we remain open. Also, to the provincial licensing body saying that all dispensaries had to apply for their provincial license in order to be granted their business license in 2019.

We proved that, and as far as we know, all the other cannabis retail shops did. So when Bryan went to the council he also asked the municipality to write a letter to that body. To, number one, not look at any provincial cannabis store until they look at the licenses that were on their plate for Squamish already. Because at that point it had already been 10 months since the licensing process began.

Did this letter and council meeting have any impact?

Coincidentally, after that council meeting, thank you, Bryan, we within days received calls, “how can we help you?”

Everyone literally said, ‘we are pressured to get you open.’ Because there was no reason for us to not be open at that point. It was dragging on and why? We were lucky enough to be in a community that allowed us to be open.

Many retailers, even in the grey market gain a trusted line of suppliers. Now that Sky High is legal, how has revamping and choosing from the singular, provincial entity been?

“Our only difficulty was to be able to actually pay the government for our supply. We needed a business bank account for cannabis retail, which we didn’t have before. Most major banks will not even look at you. The reason it took so long for us to open, was so we could pay them and buy it.

Can you give predictions for how those changes will affect your regular customers?

Now the stigma is gone we have seen a change in our demographic, more elderly users.

It’s so fun to get someone from Australia in particular. Like a kid in a candy store.

It may be early to say, but how do think this will impact the community?

Aimee, “I don’t think there is going to be a big change, I think people will kind of feel better.”

It is not pot luck, it is a joint effort with our community.

Thank you for your time Sky High Cannabis.

Not all communities slice the cake the same. While Vancouver has been stern that the upcoming provincial stores followed all the guidelines and shut down following legalization, Squamish has been vastly different. Sky High’s success has been largely attributed to the community member and dispensary owner mentioned, Bryan Raiser. Thankfully, Squamish patients have been kept medicated during the past year’s unfortunate transitioning period.