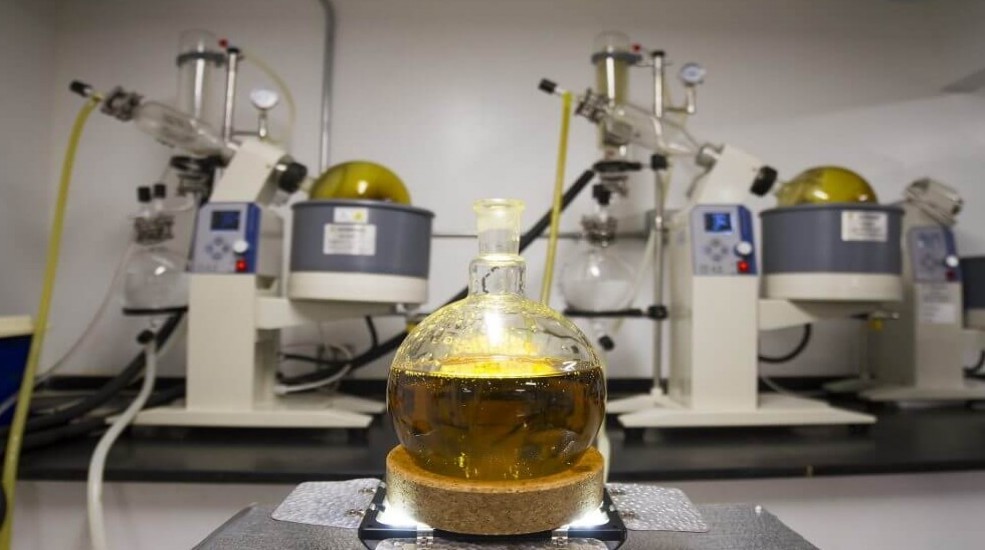 Botanical extraction is used in various industries from cosmetics to cleaning products, and of course in food. We recently detailed six of the most common methods of extraction used in the cannabis industry, and a total of nine permitted solvents. Yet, Health Canada has approved nearly forty solvents for cannabis processors. In the realm of finding the purest quality extract, the industry will scour every corner and trade secret in the pre-existent extraction industry to find new solvents or processes to be used for cannabis.

Pentane is a highly non-polar, light hydrocarbon solvent, that acutely dissolves THC instead of plant matter. With a boiling point of 36 degrees celsius, this solvent might be a bit heavier than butane but still functions well for cannabis applications. It can be found as an impurity in butane, but residual pentane is not a major concern as long as the oil is purged thoroughly, with lots of surface area for the solvent to escape from. In the face of a growing distaste for solvents and an increasing concern for patients with immune complications though, it should be noted that pentane is actually less toxic than butane.

Some CBD isolates use pentane, with at least one lab test reporting 419 ppm of residual pentane. As a point of reference, that amount is far below Health Canada’s approved limit of 5000 ppm in extracts, and so it can hardly be seen as a concern. It should be noted however that Health Canada does not ask for the release of lab results from licensed producers, so a breach of those approved limits would result in the product being rejected, but with no public release of the findings.

Like butane and other alkanes, pentane contains other isomers of itself, as well as some other hydrogen impurities and even trace amounts of acetone. Petrol giant, Shell, claims their 98% pure pentane consists of less than 3 mg/kg benzene, 1 mg/kg sulfurs, and 5mg/kg of other aromatics. If a processor hopes to produce safe extracts on a commercial scale with this solvent, they will have to distill it first to clean up those impurities.

Immediately dangerous to life or health (IDLH): 15,000 ppm is the lowest limit before the risk of explosion. Like propane, pentane does not have a limit set for immediate dangers based on health risks. Pentane is however still uniquely neurotoxic in high doses, regardless of the current IDLH data.

Based on pentane’s density, 2.94 milligrams spread across a cubic meter is considered 1 ppm, so 2.2 grams of the solvent is needed to breach short-term limits. Yet, that value is confined to a one cubic meter box, representing passive inhalation. To account for intentional, direct inhalation, we can instead use a volume of one liter, or a box one-thousandth the size, which will only need to be filled with 2.2 milligrams of pentane to reach 750 ppm. This means, nearly a half gram of extract containing the maximum limit of 0.5% pentane needs to be vaporized and inhaled over a fifteen-minute time span in order to breach that same limit. This does not account for a sizable loss of pentane that will occur when the extract is vaporized, thermally decomposing the solvent into carbon monoxide. Not to mention that the use of an area one-thousandth the size to account for direct inhalation is a crude approximation and still only represents passive exposure.

Heptane is nearly as non-polar as pentane, but it contains a much higher boiling point of 98 degrees celsius. Often times heptane is used for certain types of extractions replacing the more toxic solvent hexane.

In extraction tech, heptane can be used to extract crude oil from the herb instead of more polar alcohols. Heptane is also commonly employed as a solvent in liquid column chromatography. This separates a mixture into layers that are then individually collected, known as fractions. When separating (fractionating) cannabis, the terpenes, other cannabinoids, and finally the plant material comes apart into layers that can be individually collected.

Since this organic solvent comes from black pine trees, many might think it’s safe to utilize as their trade secret for cannabis extracts. Is it really safer than pentane, though?

It is true that heptane comes from pine trees, but it can also be produced as a petroleum product and can contain similar hydrocarbon impurities as pentane, with fewer aromatics.

Some individuals experienced vertigo and incoordination after being exposed to 5000 ppm of heptane for only four minutes. Subjects developed chronic hilarity and intoxication for a duration of thirty minutes after just fifteen minutes of exposure.

IDLH: 5000 ppm was recommended due to the noted intoxication, but 750 ppm was deemed immediately dangerous when considering inhalation toxicity – seemingly noting heptane to be far more toxic than the other approved alkanes. This means 0.48 grams of cannabis extract vaporized out of a dab rig with one liter of volume will lead to inhalation toxicity if that extract contains 5000 ppm of heptane, based on its density and IDLH data – not accounting for thermal degradation and airflow variables.

Ah, either – a solvent from days long past, still endeared as one Rick Simpson’s infamous, not-so-trade secrets. This solvent works quite well for pulling good yields of very high-quality cannabis extract and boils off at only 34 degrees celsius, but problems arise as it is quite difficult to source pure ethers. Naptha is restricted in the legal industry because it contains other random and toxic substances such as carcinogenic crude oil derivatives, but it is still sometimes used as a cannabis solvent in the black market since it does contain ether.

The use of ethers has long since lost it’s commonplace within the cannabis community given this void in easy access to a pure form. Not to mention that ether is almost as flammable as butane, but notoriously auto ignites with greater ease. Tert butyl-methyl-ether is supposedly a new, safer substitute – a common additive in gasoline, next to ethanol. It hosts an unpleasant odor, but is it less toxic?

TBME has caused birth defects in mice, but then weirdly enough, not in rats or rabbits; its sustained effects in humans still unknown. It has been directly administered to the full bladder to destroy gallstones, but when the solvent leaks from the bladder it can temporarily damage the liver. Inhalation of TMBE at fuel stations has also been known to cause headaches and nausea.

Test butyl-methyl-ether does not have an IDLH or a STEL listed, but it does have a required eight-hour workplace limit of 40-50 ppm across provinces in Canada.

The overall benefits of using MEK in cannabis extractions are unclear. According to internet forums though, at least one individual has found success in this solvent. Methyl-ethyl-ketone is slightly more polar than isopropyl alcohol with a boiling point of 79 degrees celsius. Based on exposure recommendations, MEK is more harsh and toxic than isopropyl, so we cannot condone its use, much as any solvent that is not simple RO water.

IDLH: 3000 ppm based on the four out of six rats that died after being exposed to 4000 ppm of 2-butanone for just two hours.

To the best of this author’s knowledge, I have never bought acetone hash oil or seen it in person. The simple aldehyde is indeed a solvent, and forums do exist that narrate people’s amateur attempts to make cannabis extracts with it – a process we do not recommend since it is difficult to completely purge the cannabis extract free of acetone despite its boiling point of 56 degrees celsius. Also, acetone’s unique smell and taste can be detected between 20-140 ppm, which would make for an unpleasant inhalable extract. How harmful is Acetone, though?

This simple aldehyde can contain the poisonous methanol, carcinogenic benzene, as well as toxic compounds known as mesityl oxide and diacetone alcohol.

Fat breaks down into acetone, so your body actually produces this solvent during the production of sugars. It can also be found in the air we breathe, yet both sources are in minute quantities.

Externally, acetone exposure did not reveal toxic effects at 2100 ppm for eight hours, however, other research suggests exposure to 1000 – 6500 ppm produced irritation and headaches. It was also deemed a narcotic in mice at higher exposure limits and can even damage the nervous system. The lethal dose in rats is 5.8g/kg or 20,706 ppm after eight hours.

Ethyl acetate is produced from the reaction of ethanol and the main component in vinegar, acetic acid. Tyrell Towle of Easy Extracts LLC holds a patent in which cannabis extracts in hot ethyl acetate, before being frozen and dewaxed in the ester. GW Pharmaceuticals utilizes the ester in combination with hexane when purifying cannabinoids with liquid column chromatography. Some black market extract artists in Canada have been alleged to have winterized their extracts in acetates, but those trade secrets were more just rumors this writing author overheard from viable sources.

IDLH: 10,000 ppm based on health considerations in man.

Ethyl acetate and acetone are both polar but possess different properties than other solvents, like ethanol or isopropyl alcohol. Acetone and the ester both lack an added, reactive element in their molecular bonds and so they are called polar aprotic solvents.

Ethyl acetate’s precursor, acetic acid contains its own reactive properties that cancel out ethanol’s when the two combine to create ethyl acetate. We will discuss the concerns of dehydrated vinegar, along with other esters, in the following installment.