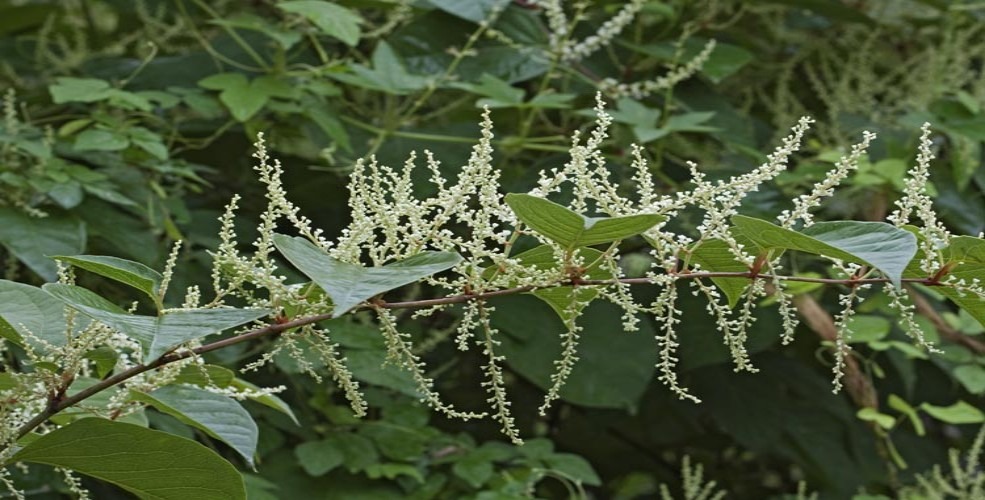 With so many chemical and “biological” pesticides, you might ask if there is anything more natural available? During this series, there has been one more addition. It’s an extract of a plant related to the Japanese invasive species – Knotweed. This knotweed extract uses terpenes, but mostly natural phenols, to repel pests. That is unless something else is hiding within its trade secrets – like synthetic fertilizers.

Regalia Maxx’s knotweed-containing pesticide uses tactics meant to induce shock states in the plant known as Induce Systematic Resistance (ISR) and Systematic Acquired Resistance (SAR.) While infection normally induces these responses, in these cases, the pesticide triggered shock state forces the plant being sprayed to release its own natural phenols.

These are naturally occurring compounds that cannabis is known to produce. A more well-understood group of phenols found in cannabis are known as flavonoids. These do denote some flavour, mostly used as bittering agents. They have many other properties that are still being explored, though. They repel insects, yet can be medicinally beneficial for us – just like terpenes.

So, why should you be concerned about a natural pesticide that induces this type of shock?

Never judge a pesticide by its actives

Finally, here’s another natural method, even though spraying a flowering crop will always leave an unpleasant taste and effect in the bud. But we can always rely on the plants own natural defences, right? Beyond these issues though, how organic is this Knotweed extract?

Other cannabis pesticides claim to use mystery fertilizers but no ingredient has ever been listed in their documents. Now, inert fertilizers finally gain an identity.

Fertilizers that are added cause mutations when combusted. They are supposedly chosen due to Marrone Bio’s fantasy that using an organic solvent alone is problematic and can lead to microbial contamination.

According to old patents, they first extract the Knotweed with either regular ethanol or denatured ethanol. They prefer the poisonous variety because of cost, of course, ensuring the denaturing agent isn’t phytotoxic. Who in their right mind thinks about human toxicity when formulating pesticides?

Then they add the liquid stabilizer. They prefer mixing 25% salt of urea, 18% ammonium nitrate, 20% calcium nitrate, and 10% magnesium chloride into their initial concentrate solution. These can be organic or synthetic stabilizers.

There is as much synthetic pee and plant-food as there are pesticides in this formulation!

A brand they prefer is BASFoliar(E) 36 fertilizer.

Nitrogen and ammonium containing agents are known to cause cancer if they are combusted. Residuals left behind from sprays or nutrients in poorly flushed buds is why cannabis has been reported to cause lung damage.

“Their cannabis sample’s smoke yielded ammonia (NH3) at a rate of 720 µg per 775 mg cigarette, 20 times higher than that in tobacco smoke, possibly due to usage of synthetic nitrate fertilizers.”

There is a chance another group of fertilizers are included, including myclobutanil. It is likely they won’t be selling cannabis producers this hydrogen-cyanide producing product. The technology is in their active patents though,

“…the combination comprises (a) an extract derived from the family Polygonaceae (e.g. Reynoutria sachalinensis) and (b) a single site fungicide and/or multi-site fungicide which may include but is not limited to myclobutanil, quinoxyfen, azoxystrobin, acibenzolar-S-methyl, mefenoxam, triflumizole, fludioxonil, propiconazole… In a most particular embodiment, the antifungal agent is myclobutanil.”

So, to avoid banned ingredients they have given themselves several options, including other chemical fungicides and anti-bacterial agents.

The most recent, Canadian patent states the inert ingrediants contain a pigment, an ethoxylated alcohol, a detergent, a conditioner, antifreeze, and fertilizers.

Foliar fertilizer sprays are now secretly available to producers. To add salt to a wound, they can be used the Day of Harvest. Cannabis flowers can be covered in carcinogenic plant food. Despite this fact, fertilizers are still banned as a foliar application to avoid bacterial or fungal contamination. Actual plant-food is partly regulated through a different body other than the Pesticide Managment Regulation Agency, depending on the fertilizer and how it is used. An application process, act, and agency we will explore in the next installment on Plant Food.