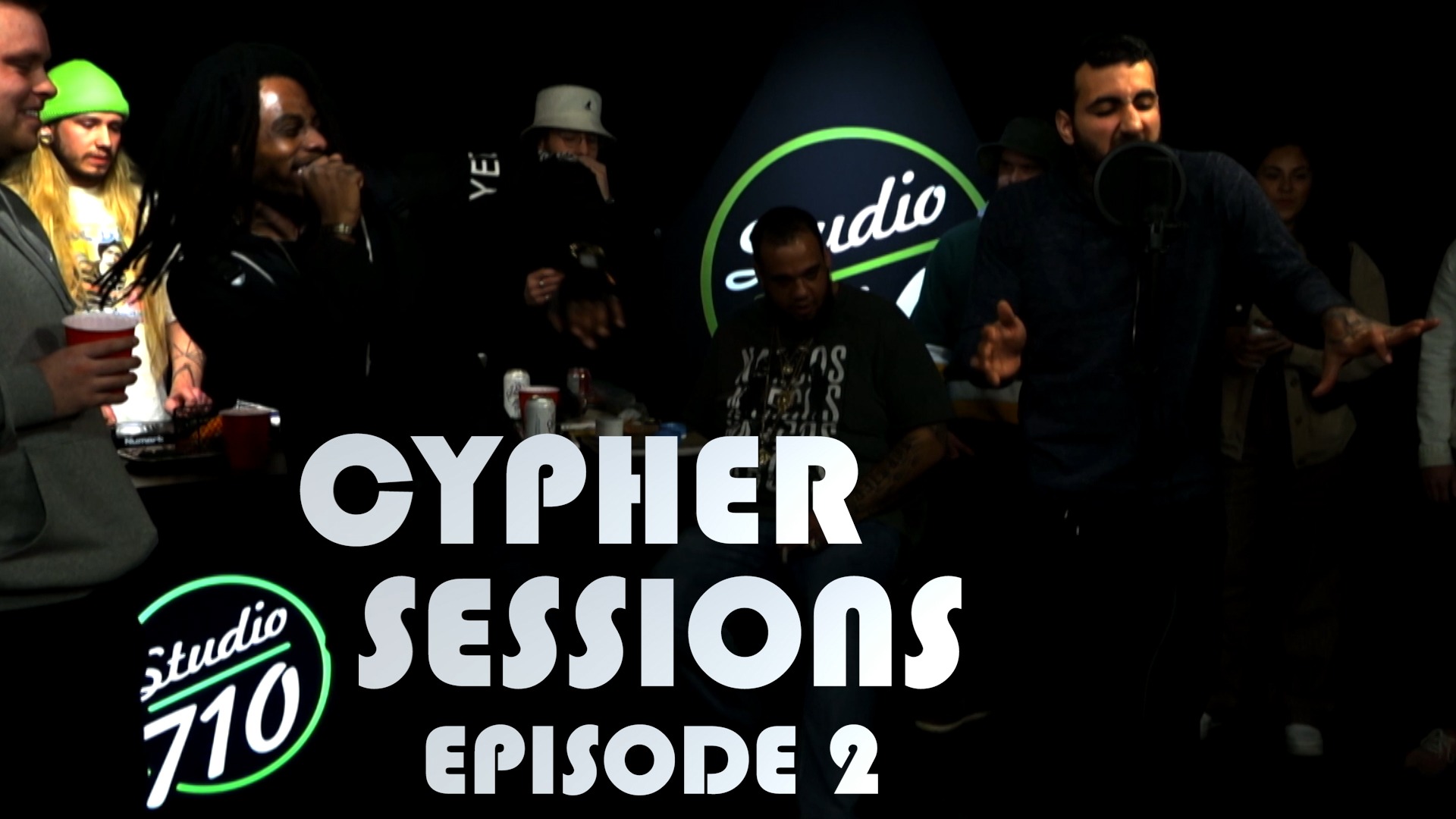 The latest Studio710 Cypher is here, once again showcasing a mix of new and familiar faces, that are as diverse as the 604. Once again, Studio710 opens its doors to some promising young talent to the Cypher Sessions, building buzz around Vancouver, with an increasing calibre of artists on hand.

Over timeless instrumentals that would sound right at home in the 90’s, back when hiphop was more about the rhymes, lyrics, and content, the rappers come right round, bringing that to the beat and turntables today.

Fave heavy hitters from previous sessions to some brand new people that have never been to Studio710 before – but from the way the rapped, they are veterans on the mic.

It kicks off with Jacobi the Giant, who memorably made his debut at the last cypher, and it’s great seeing him back spitting more gritty street stories about coming up and the hustle to survive.

Next was 5AM, who came in with a more relaxed and melodic flow over the same godly Statik Selektah beat that Jacobi just rapped over. 5AM demonstrates how he can “snap on the track like bone marrow” as he stitches together witty lines like that into his introspective bars.

The beat switches as Tee Krispil steps up to the mic to preach some knowledge wrapped up in a mesmerizing flow over some jazzy horns that will take you back to when rap was about the message. Tee is followed by Aktu El Shabazz who spits a sweet 16 off the top.

Jacobi the Giant goes up for a second round, and he once again lives up to his name as the mic stand hastily gets extended an extra couple feet so it can reach him. Next, host Creed Taylor has his turn, stepping up while puffing a blunt, before getting into a chill, laidback stoner freestyle where he talks about all the ways he’s used cannabis – “vaped it, smoked it, ate it, decarboxylated”- which gets a great reaction from Jacobi.

5AM goes in for a second helping over a sligthly poppier beat than last time that allows him to use some interesting, non-orthodox flows that keep your ears guessing. Next we take a musical detour with DTOUR over a languid jazz beat as he namedrops famous Vancouver mainstays like Olympic Village. And if you thought DTOUR wasn’t a Vancity local, his next line will erase all doubt:

“Did you get the hint I’m running outta pocket lint, [I’ve] seen a fucking riot that was caused by a hockey stick!”

Realije the Beatbox MC speeds things up with some fast double-time rapping. It’s no easy task, especially when you’re doing it live and surrounded by your peers. You can tell he’s been rapping for a long time after he recovers so smoothly from a minor mistake because he gets right back into it. He and Tee Krispil even try freestyling a hook!

Stay tuned for Finch and DJ Denise, who come up a bit later- perhaps they were just chilling and feeling the vibe until that bolt of inspiration hit them, or maybe they were building up the courage to get there? Whatever the reason, it’s always dope to see people get up there and give it their best shot. It helps build community and it’s all love, after all.

Also, a quick shoutout must go to the DJ who laced this cypher with some amazing instrumentals that might make you wish for it to be a playlist. Let’s hope the tracklist is included in the video info!